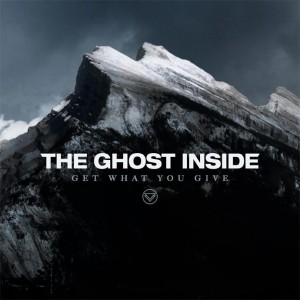 THE GHOST INSIDE TO RELEASE NEW ALBUM
Get What You Give Out June 22nd in Australia.
Produced By Jeremy Mckinnon of A Day To Remember

California’s most passionate and articulate exponents of hardcore will release their  exceptional third album, Get What You Give on June 22nd. The album, produced by Jeremy Mckinnon of A Day To Remember, embraces The Ghost Inside’s  powerful and affecting sound that merges insightful and introspective lyrics with charging drums, lightning fast riffs and devastating breakdowns. Check out the album’s trailer which features new music from  Get What You Give here:

The Ghost Inside are currently streaming their crushing hardcore anthem “Outlive” via Epitaph Soundcloud which can be found here: http://soundcloud.com/epitaph-records/the-ghost-inside-outlive/s-cXe0b

“Our new album is musically, lyrically and vocally our best album to date,” says frontman Jonathan Vigil. “After spending two years on the road following the release of our last album (Returners), we’ve developed a true sound for our band.  We really pushed ourselves to the limits to create something we can honestly be proud of and to prove that in life, you’re always going to Get What You Give.”

Get What You Give is nothing short of the band’s most dynamic and explosive material thus far, an album that embraces the authenticity, dedication, perseverance and the most literal adherence to the core values behind the band’s craft.  Formed in 2007, the quintet’s two prior releases – the breakthrough album Returners (2010) and their first full-length, Fury and the Fallen Ones (2008) – laid down the promise and potential that has now been fully delivered with their Epitaph Records debut.

Tracks like “Dark Horse,” “Engine 45” and “Outlive” are anthems that are built for crowd participation in the live environment, where The Ghost Inside takes pride in giving all of themselves over to the crowd.  Lyrically, the songs tackle a wide variety of topics, from addiction, to self-sacrifice.

The Ghost Inside have shared the stage with the likes of I Killed The Prom Queen, Deez Nuts, Parkway Drive and The Devil Wears Prada on the bands 3 previous visits to Australia.

CD Track Listing – Get What You Give

Tags Epitaph Records The Ghost Inside