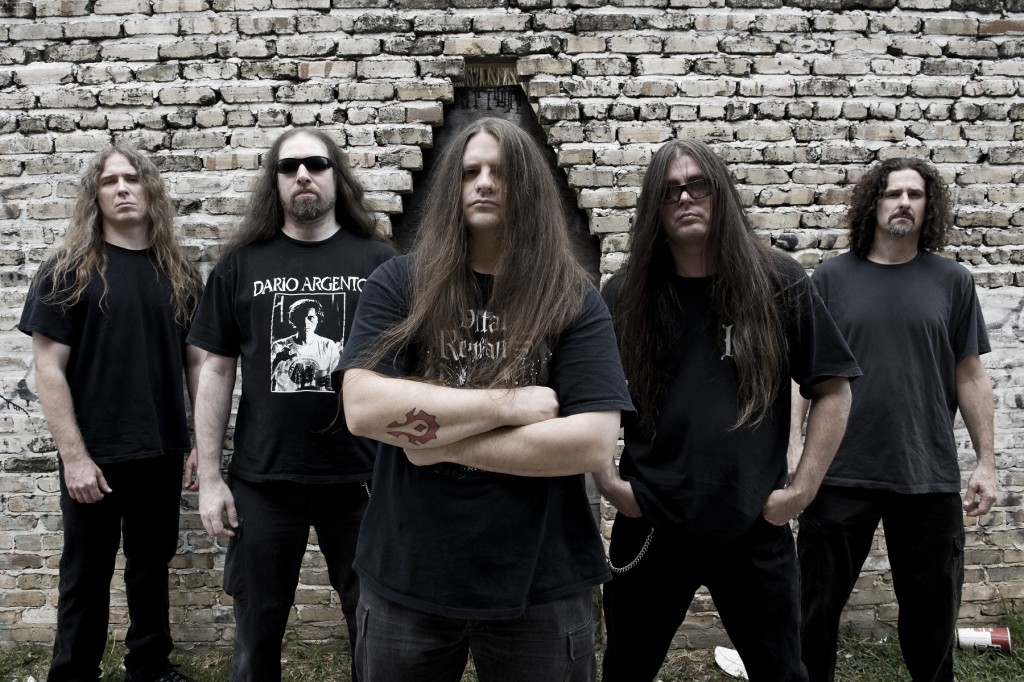 “Controversy is always a positive thing even if it’s in a negative way, like any of that Government censorship crap where they try to stop people from doing what they want to do, it’s just like putting gasoline on the fire and it always works in our favour in the long run.”

From Official Bio:  Returning with the ceaselessly hostile Torture, Cannibal Corpse prove that when it comes to combining unrestrained maliciousness, involving song writing and technical precision they still have no equal, once again fortifying their position at the forefront of death metal. The twelfth full-length of their inspiring twenty-four year career, the Floridian quintet have never sounded so vital, the album building upon the wealth of powerful, dark, and memorable songs comprising 2006’s Kill and 2009’s Evisceration Plague and pointedly upping the ante at every turn. While this marks the latest progression in the band’s sound, Torture also witnesses a return to what drummer Paul Mazurkiewicz accurately terms “the frenzied attack of Butchered At Birth (1991) or Tomb Of The Mutilated (1992)”, infusing the band’s advanced musicianship with the raw savagery that haunted their earlier releases, and in the process conceiving the definitive Cannibal Corpse record.

In 2012, Cannibal Corpse have ensured that the twelve songs comprising Torture are the very best and therefore cohere to make the best possible album, though they are not content to rest upon their laurels and they are as hungry as ever to unleash their distinctive breed of aural horror upon heaving mosh pits. “I haven’t been this excited about a release in a long time,” enthuses Mazurkiewicz. “We worked so hard at it and we hope that the fans feel the same way we do. Being out there and getting to play these songs live will once again prove to people we’re not going anywhere. We’re not going through the motions, we’re really trying to be the best band we can be, and we’re just getting better.”

At home in Tampa Florida we had a chat with Cannibal Corpse guitarist Rob Barrett about the band, their new album ‘Torture’, touring and of course, controversy…

Firstly, I wanted to say, the album is so heavy, it’s awesome, congratulations on it!  I always like to ask artists, can you give us 5 words that sum up your new album.
Over the top, fucking heavy shit ha ha

Were you aiming for a specific concept leading into making the album?
Well yeah when we started writing for the new songs we were just throwing around ideas for the album title and then the name Torture came up, we just thought it was a good title to write a bunch a songs that go under that category.  Most of the songs on that album have something to do with Torture.

How were the songs put together and just where does the inspiration for the songs come from?  Was it solely based off the title?
I’m not even sure at what point the title came in to play really, we just started writing music as we always do and just started working on titles from there and it all just kind of falls into place by itself eventually.
I notice that once again there aren’t any songs about rainbows and unicorns on this release?
Yeah I think we don’t have too many people that are disappointed about that ha ha.
Yeah, the content is great and I was listening to it last night before heading off to sleep, perfect going to bed music.
Ha ha ha.

Do you guys write while on the road or is it all done in the studio?
It’s not written in the studio nor on the road ha ha, it’s done at home, that’s what we did for this album and what we did for all our previous albums is as soon as we decide to stop touring for that album cycle then which is usually around the holidays, then we’ll take the holidays off and we’ll reconvene sometime in mid-January and then start writing for the new album until we have enough songs that we think are enough to record.  We usually kind of set a date, like a deadline of when we’re going to go in and start recording, so at least we have a visual picture of how much time we have to write the material and so it’s all pretty much done at home.

How long was the process behind putting the album together?
We started in January and we wrote all the way up until two or three weeks before September when we went o Sonic Ranch to start recording.

A lot of emphasis has been put on where you recorded the album in Texas, what was the decision to head out there to record the album?
We figured it was that the way that studio is set up it’s out on a Pecan ranch pretty much in the middle of nowhere, it’s a farming town, a town called Tornillo which is forty minutes away from El Paso, its literally a five minute bicycle ride to the Mexican border, I used to ride a bike down to the big fence there to Mexico ha ha.  It’s in a secluded area and all you have to pretty much do is concentrate on what you’re there to do and record, like when bands go to LA they’re like ‘well let’s finish up recording so we can go out and party’ ha ha so there’s no distractions out there which is pretty much the main reason we went out there.
Just a leisurely bike ride when you’d finished for the day…
Exactly, and there was a gym there and a pool, it’s pretty much like a little vacation resort but with a bunch of studios on the land.

In the three years since your last album and in making Torture did you set out to do anything differently to previous releases?
Well song writing wise it was just a continuation of where we left off with Evisceration Plague Probably with just little elements of the older albums in there on a couple of songs like ‘Demented Aggression’ is a pretty straight forward old school style song.  I think we pretty much went in to the writing the same way we always do, I think there’s maybe a little more variety in these songs, they all kind of have their own identity because we split the writing up a little more evenly this time.  Alex wrote five, Pat wrote four and then I wrote three.  Paul wrote the lyrics for all of Pat’s songs and then he wrote the lyrics for one of my songs too.

You’ve once again worked with Erik Rutan, what is it that makes him the right choice?
Well the last two albums came out really well and it seemed like the right thing to do, we were happy with how those albums came out and the only difference between those two albums and torture is that we took Erik out to Sonic Ranch in Texas to do most of the tracking.  It just felt like the right thing to do, we’re comfortable recording with him and it came out killer.  I think in the back of our minds, we were thinking he’s two albums in to producing us and third time’s a charm ha ha.

What are the touring plans surrounding the album?
We already did a tour just as the album was released, we did the Full Of Hate festivals in Europe with Behemoth, Legion Of The Damned, Suicidal Angels, Misery Index and Nexus Inferis and that tour finished like about a week before the album was released.  Then we did Destroyers Of The Faith tour which was five shows in England and one show in Scotland with Triptykon and Enslaved and Job For A Cowboy.  Then we came home and we’ve been home since then and that was two or three days before the album was released on the thirteenth, then we’ve just been rehearsing, getting ready for this next tour coming up which starts next Thursday, the US tour with Exhumed and Abysmal Dawn.  Then that tour, we’ve got some European festivals that we’re going to do in the Summer, we’ve got a Summer tour in the States again, then we’re going to do Australia and Japan in October and we’ve got all kinds of touring we’re going to do, so stay posted ha ha.
So, you’re coming to see us in October?
Yep, it’s looking like that, I mean no dates have been confirmed but they’re working on it as we speak as far as I know.

Obviously over the years there has been controversy in relation to your music and in some cases it’s been banned such as here in Australia, are you still worried about that?
No, I think it’s awesome!  Controversy is always a positive thing even if it’s in a negative way, like any of that Government censorship crap where they try to stop people from doing what they want to do, it’s just like putting gasoline on the fire and it always works in our favour in the long run.
It probably makes you want to do it more!
Ha ha yeah exactly, like that one comedian guy over there that did ‘Rancid Amputation’ on the Tv show ha ha, that was awesome man.  He’s pretty much showing how silly it is to try and ban a band because of their lyrics. 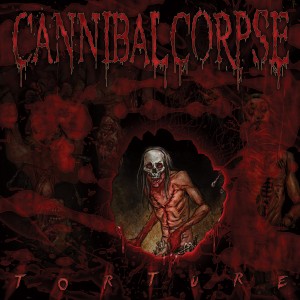 Now on to the cover art, what was the idea behind the return to the graphic imagery?
I think we never wanted to lose that, it just kind of went away on its own for a little while there and it wasn’t intentional.  I think when we pretty much started working on the ’Kill’ album, it was when I’d just re-joined the band and so it was a new line up and things were changing a little bit as any band would somewhat when there’s a line-up change, but the good thing is that I was in the band before, so I fit in to the formula and the chemistry.  But with the artwork, the lyrics have never changed pretty much, it’s just the artwork that everyone was disappointed with because it wasn’t gory with the ‘Kill’ album, but for that album we just wanted to keep things simple and really test everybody to just focus on the music, the most important part you know?
And Torture just has imagery written all over it…
Yeah it’s always a good thing to have the gore stuff going along with it; it’s the whole package when you’ve got the graphic artwork like that.  We just have to always keep in mind that we’re going to have to have an alternate cover for certain music chains that don’t want to carry it and certain countries that don’t want that artwork in their country blah blah blah, blah blah blah…
Do you ever get tired of that though?
Didn’t I sound a little tired of it ha ha
I don’t understand why people are so worried about it?
Well yeah for a band like us I think the artwork is an important part of the whole package because our type of fans they want to have the artwork and the booklet on the inside, we’re not one of them type of bands where our fans are like ‘Oh I’ll just download it and don’t need the artwork or anything’.  It’s the whole package that’s why we need to keep upholding our reputation by having the killer sick artwork to go along with the music.

Hopefully that can continue for a long time.
Yeah, we’re feeling pretty good and I’m sure the other guys will say the same, it’s not like the end is near for us, we still have plenty of gas in the tank.