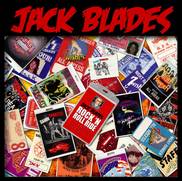 In 25 words or less:” It’s gotta be said, as much as I enjoyed that last Night Ranger album, I think this Jack Blades solo release takes the cake.”

Hot on the heels of Night Ranger’s release last year, Somewhere In California comes this mighty slab of rock in the form of a solo release from their front man, Jack Blades.  Mixing a little bit stylistically from all eras of his career, this album truly is a “rock ‘n’ roll ride”, and from the outset kicks off in high gear with a relentless energy and positivity and just doesn’t let up.  Featuring contributions from his Night Ranger bandmates Brad Gillis, Kelly Keagy, Joel Hoekstra and Eric Levy, and also Cheap Trick’s Robin Zander, the whole album just oozes the quality of musicianship and song writing that you would expect from an artist the calibre of Blades.

The opening salvo of Back In The Game and the title track are balls out rockers and would be right at home on a Damn Yankees release, particularly the latter, with those trademark Damn Yankees/Blades chorus vocals featuring prominently.  The seemingly autobiographical track Born For This is an out and out rock anthem, what a chorus and what a real cracker of a song.

Speaking of what a song…Hardest Word To Say, this song deserves a paragraph of it’s own.  If this isn’t one of the greatest ballads I’ve heard in a number of years, then I don’t know what is.  It undoubtedly would have been as big a song as Damn Yankees High Enough if released back in the day.  There’s an almost Don Henley Boys Of Summer vibe in the verses, but then the chorus just explodes with slightly country tinges.

Featuring guest vocals from Cheap Trick’s Robin Zander, Anything For You has a real Tom Petty meets Cheap Trick meets The Beatlest kinda vibe, whereas West Hollywood also sees Blades channelling an almost pyschadelic acoustic vibe.  Elsewhere, more driving anthemic rock in the form of Love Life and Say You Will keeps the album delivering gem after gem right to the very end where the largely acoustic and bluesy Hey Now closes the album.

It’s gotta be said, as much as I enjoyed that last Night Ranger album, I think this Jack Blades solo release takes the cake.  Whatever you do don’t let this album get under your guard, it’s simply one of the finest quality rock albums you are going to hear this year.