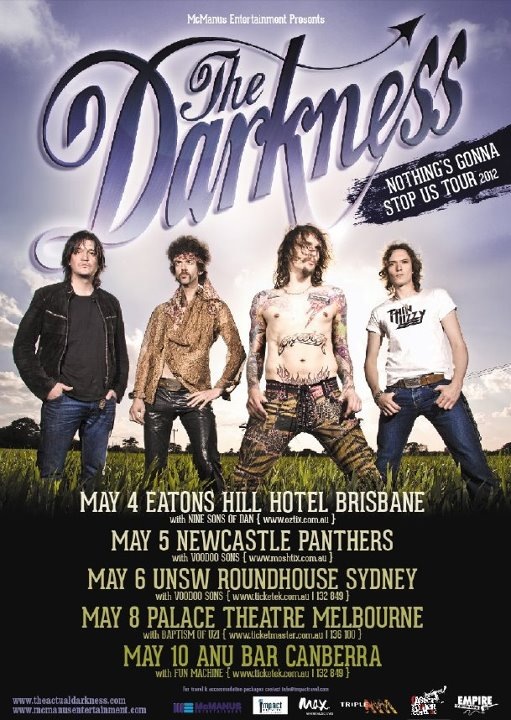 McManus Entertainment are thrilled to announce British glam rock sensations, The Darkness are bringing their Nothing’s Gonna Stop Us tour to Australia in May 2012.

It’s been six years since The Darkness toured here, and in 2012 Australian fans will be graced with the original line up of Justin Hawkins (vocals/ guitar), Dan Hawkins (guitars/ backing vocals), Frankie Poullain (bass), and Ed Graham (drums), following their reunion in 2011.

“…heroically reunited, with a returned sense of fun and still this millennium’s most multi-dimensionally entertaining live rock show.” LA Weekly

Their yet to be titled third studio record, their first in eight years, and the follow up to their multi platinum selling Permission to Land (2003), that spawned the smash hit singles ‘I Believe In A Thing Called Love’, ‘Growing On Me’ and ‘Get Your Hands Off My Woman’ is due out later this year.

Known for their epic live shows, The Darkness have returned to the scene with a level of dramatic fanfare that is delighting fans and critics alike. With tours already completed in Europe and the USA, the Brit Award winners will deliver performances of stratospheric proportions.

Tickets for The Darkness’ Nothing’s Gonna Stop Us Australian dates go on sale 9am April 4th. All tickets are $72 plus credit card fee where applicable.