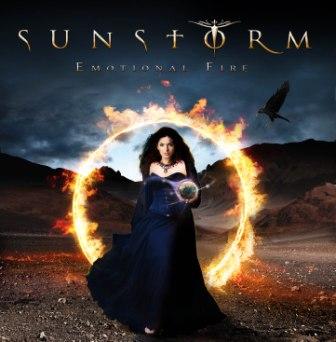 25 words or less: Emotional Fire is a required listen for all those existing Sunstorm fans and those who love hearing the sound of Joe Lynn Turner’s voice all over pulsating melodic rock songs.

As a vocalist, Joe Lynn Turner is one of the true greats in rock, covering a multitude of styles with aplomb.  From Rainbow to Deep Purple to Yngwie Malmsteen, there’s been a collection of solo releases, with his first Rescue You an AOR classic, not to mention numerous appearances as a session vocalist and then you add in projects with the likes of Glenn Hughes.  Under the banner of Sunstorm, Turner has had a vehicle for delivering some of his finest ever work in the melodic rock vein and Emotional Fire sees the third Sunstorm release.

In keeping with the tradition of the past two releases, this album follows a theme of sorts, on this release, we see Turner recording his versions of a couple of tracks that he had previously contributed backing vocals for back in the 80’s  The title track Emotional Fire written by Michael Bolton, Desmond Child and Dianne Warren appeared on Cher’s Heart Of Stone album.  Similarly the Bolton and Warren penned You Wouldn’t Know Love was recorded individually by both Bolton and Cher and then there is Gina which was recorded by Bolton for his album The Hunger.  These Sunstorm recorded versions are naturally far more crunchier and rockier than their more pop oriented originals…  Importantly it’s great to see these versions stay largely faithful to the originals, I mean seriously, could you imagine You Wouldn’t Know Love without that “air drum” section to the tune of “knew…it…be….fore”.  If you know the song, I know that you know what I’m talking about…

So that’s 3 songs out of a total of 11…the remainder are made up of tracks written by the likes that traditionally can be found contributing tracks to similar types of Frontiers Records releases.  Tom and James Martin (Vega, House Of Lords, Khymera), Robert Sall (Work Of Art), Daniel Palmqvist (Xorigin, The Murder of My Sweet) and Soren Kronkvist (Crash the System, Issa). Opening track Never Give Up and The Higher You Rise are a couple of bombastic tracks, whilst closing track All I Am shows allows Turner to extend his vocals across a soaring ballad.  Whilst a few tracks may be a bit more modern sounding in a stylistic sense, none of them stray from being just straight up melodic rock.

Simply put, Emotional Fire is a required listen for all those existing Sunstorm fans and those who love hearing the sound of Joe Lynn Turner’s voice all over pulsating melodic rock songs.  An album that is very likely to meet, rather than surpass most people’s expectations, but that’s really not a bad position to be in, for when it comes to Joe Lynn Turner, you almost always expect to be delivered nothing short of the highest quality and this album is no exception.