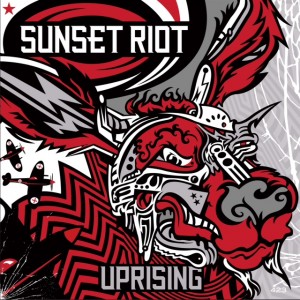 25 words or less: With a distinctly Australian flavor in the vein of The Screaming Jets and a massive dose of bluesy 80’s hard rock stylings, Sunset Riot are proudly flying the flag for Australia in the name of rock.

Hailing from Sydney, Australia, Sunset Riot are well advanced on their journey to forge their reputation as a live act with an arsenal of big riffs and even bigger ambitions.  But unlike many who crash and burn, these ambitions in Sunset Riot’s case are matched with an ability to deliver some kick ass ROCK and an old fashioned work ethic that has seen them travel thousands of kilometres both in USA and Australia to take their rock as far and wide as possible.

If you are already sold on Sunset Riot’s brand of riff injected, bluesy, hard rock, then Uprising delivers more of what you already love.  Red Ferrari kicks off the six track EP in high octane fashion with a stomping riff and a real fist pumping shout out chorus.  Something’s Gotta Give hit’s you immediately with it’s scorching lead break and like the opening track, features more real fist pumping action and a breakdown that will “welcome you to the jungle”, if you know what I mean!

Red Leather first made an appearance on the bands 2009 release Take A Bite and really amps up the sleaze, which speaking of sleaze, leads nicely into the rawest and grittiest track on the EP, Save Me… from L.A.  The track once again hints at a strong influence from the likes of Guns N’ Roses, which I am sure the band will have no concerns being mentioned?  Mark Opitz (INXS, AC/DC, Cold Chisel, Noiseworks, Roxus) takes the helm on production duties and captures a real live feel throughout, which in essence is what this band is all about.  If you add dripping sweat into the equation, what you hear on the CD’s is definitely what you get when you see Sunset Riot perform live.  The band have previously shown that they possess a more melodic side with Moonshine from their previous release and this time around it comes with Stir Crazy, which for the record is my favourite track on this EP.

In this modern day music world of genre’s and sub-genres and post-this and post-that, it’s great to be able to say Uprising is just a great ROCK release.  As simple as that, with a distinctly Australian flavor in the vein of The Screaming Jets and a massive dose of bluesy 80’s hard rock stylings, Sunset Riot are proudly flying the flag for Australia in the name of rock.  From Launceston to Bendigo to Adelaide to Toowoomba to Canberra to Rocklahoma Festival USA 2012 to the Whisky A Go Go or the Viper Room in Los Angeles, Sunset Riot aren’t afraid to take the rock to where it needs to be heard and for that I salute them!  In the tradition of live Aussie rock, make sure you get out and support Sunset Riot WHEN, (not IF) they come to a town near you….

For fans of: ROCK 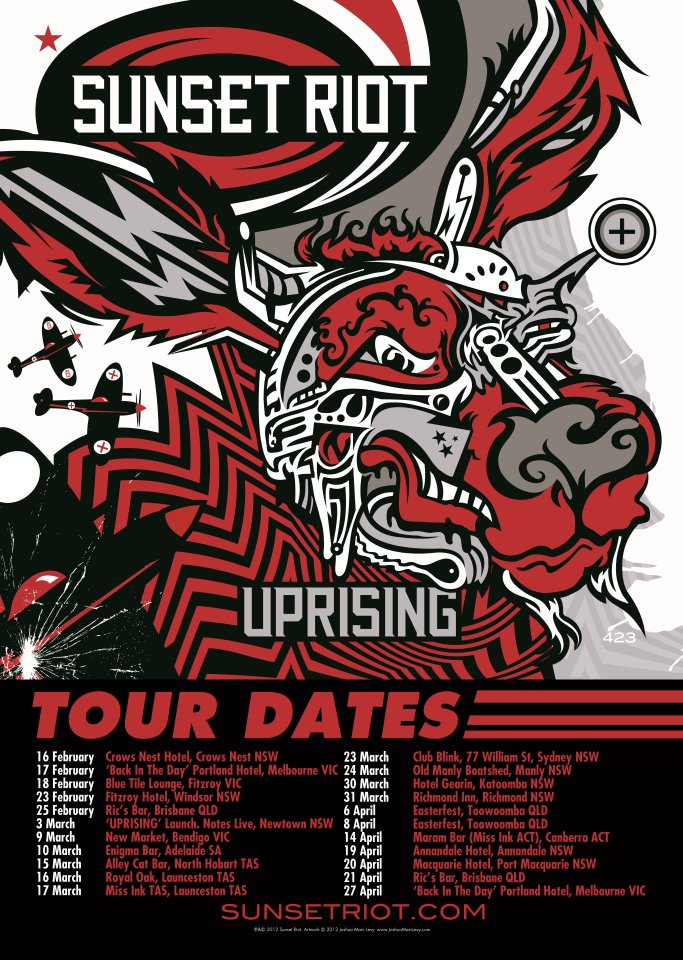