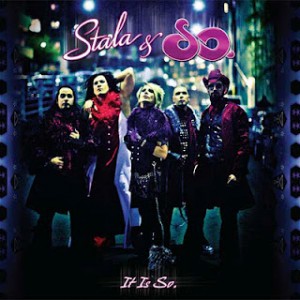 Official Bio: Founded in 1997, So. is known for melodic rock tunes and positive attitude and is fronted by their charismatic vocalist, Stala.  The band has had the freedom to follow their own direction in their music and live performances while entertaining audiences and gathering lots of fans along the way.  Other musical projects sadly forced the band to be on hold for a while but now they are back… even more colourful than before!

The 70’s and 80’s glam rock bands, such as Sweet, T-Rex and Ziggy Stardust -era David Bowie, have had a strong influence to the bands image.  So. is making music professionally and also having fun with it. The late Finnish comedian, Spede Pasanen, said: “The main thing is to have FUN!”.  This has been, and continues to be, the guideline for So. as well.  No one is left cold by the show by So.!

In the beginning of 2011 the band took part in the Finnish Eurovision Song Contest under the name of Stala & So. They made their way to the national finals with nine other artists and performed on the live TV show in front of a nearly million viewers. There is also one ESC 2006 winner in the band’s line up.

After the Eurovision hassle it was time for the Finnish release of their self-written, -recorded and -produced debut album “It Is So.” and the video from the song Bye Bye.  In the spring and summer 2011 the band focused on promoting their debut album and touring.

The band was busy also in the studio during the summer 2011. They recorded five new songs and those songs were released as an ep, titled “Gimme Five“. The release date in Finland was September 14th 2011.  The rest of the Europe will get their share during March 2012. The European release of Gimme Five will also contain one new Stala & So. -original and four cover songs, all acoustic versions. This album will be released at the same time when the band is doing their first tour in Europe.

After the European tour the band will go to the studio and start working on the next album. The release of that album will be at the end of 2012.

This is Stala & So. for your listening and viewing pleasure. Join the ride!

Let’s start with the basics first, the history of the band.  Stala & So. has existed since around 1997…or was it So existed first and then it became Stala & So….?  Here’s your chance to give us a brief history lesson 🙂
Me and our bass player Nick formed the band 1997 as So. (dot included).  We had different line ups through the years until Pate and Sami J. joined in 2005. When me and Nick both joined Lordi, So. was only a therapy band for us for a while.  In the year 2010 I wanted to start to make a solo record by myself.  Nick and Sami joined the project.  Most of the songs were the old So. songs.  At that time Hank became our drummer.  When they asked us to join the Finnish Eurovision song contest we needed to decide what is our new name. That’s why we are called Stala & So. now

For the benefit of our readers who have not yet heard the band, how would you describe the style of music that Stala & So perform?
It’s a melodic hard rock with energy and good harmonies. It’s a combination of Kiss, Whitesnake and Europe.

Can you introduce each member of the current lineup of band and give us a fun rock ‘n’ roll fact or myth about each?
Stala is the singer and the main songwriter. During the Lordi days it took 20 minutes for him to get ready to stage, now it takes at least 30 minutes.

Nick is the bass player who was known as Kalma in Lordi. When he gets drunk he will give you tickets for bad behaviour.

Sami J. is the main lead guitarist.  Once he was RATT’s Bobby Blotzer’s drum tech. He didn’t even fire him.

Pate is our second guitar player. Believe it or not he owns some lambs. You can hear two of them in “It Is So.” album’s last track “E-Major”

Hank is our newest member and the drummer. He also played with the latest winner of Finnish Idol.  Sometimes we call him Hnak. 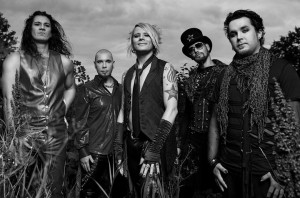 Your album “It Is So.” was released earlier this year, which I very much enjoy.  How has the reaction to this album been from fans around the world?
The fans have loved it. The response has been very positive. It’s maybe because it has these old school type of hard rock songs in it with more modern production. Unfortunately not so many have that album, yet.

In terms of your song writing, what do you consider to be the most important things that need to feature in a Stala & So song to give you your trademark sound?
A good melody, definitely. Without a good melody the song sucks.  That’s my motto 🙂  After that comes the vibe and the feeling.  For example our guitar players might have a good riffs to use, but if we can’t build a good melody to that song, the riff is useless.

What inspires and influences your music the most, in both a lyrical and musical sense?
Like I said earlier a good melody is the thing. Then of course the energy and feeling.  If I hear a good song that might inspire me to write a better one. Lyric wise I like simple lyrics. I also like that the lyrics sound good. It doesn’t have to be too fancy. I like the style: “put your hand in my pocket, grab onto my rocket” 🙂

Having written, recorded and produced the album yourselves, how long did this whole process take from start to finish?  It must be a very proud feeling to have recorded such a great album entirely by yourselves!
It took about a year.  But I didn’t do it all the time.  For example in the middle of that process I was in USA two months to record Lordi’s last album.  Basically I didn’t have much choice but to do it by myself.  We didn’t have a record deal at that time.  It was also something I wanted to prove myself that I could do it.

Your music to me certainly has a real “soundtrack” type of feel to it.  What kind of movie do you think your music would be best suited to and why?
A crazy teen comedy or a soundtrack from the movie called “How I Became Stala” 😉  Seriously I think the music might suit well in a comedy. This is not a horror movie stuff.

How would you describe Stala & So. as a live band, does your live show have as much fun and energy as listening to your music?
That’s the ultimate goal for every night.  To put the smile on people’s faces.  Rock n’ roll is all about having fun, right. Sometimes there’s bad stand up comedy on the stage, sometimes dancing. 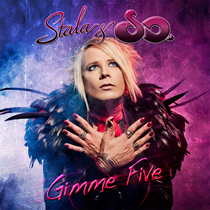 Your new EP “Gimme 5” is soon to be released, can you share the background behind following up your recent album release with this 5 track EP?  How would you describe it musically compared to your album?
There were plenty of songs we didn’t put on to the first album, because we wanted to make some new songs there as well.  Some fans were complaining that how come this song isn’t there or this song.  So we decided to record those old time favorites.  There are also some shitty versions of those songs in Internet, so we wanted to make those songs properly.

Next month (April ) we are releasing it as an European version.  There’s 5 bonus tracks as well. We recorded studio live acoustic versions of some of our own songs.  There’s 1 new song, one remake and 3 cover songs.

With Stala being involved with Lordi as drummer for about 10 years, I have to ask, how have Lordi fans embraced Stala & So.?
Mostly good.  Many of those understand that this is what I want to do now, my own music.  There are fans who would like to see me with Lordi again, but it’s time to move on.

Stala & So. has a very strong visual image, what are the big influences on your image?
Well the 70’s glam/glitter stuff definitely. Ziggy Stardust, The Sweet, T-Rex had good looks.  We like to put the glamour back to rock.

Watching your new film clip for “Hey What’s Goin’ On”, I see a range of t-shirts being worn and posters on the wall, from Hardcore Superstar to Rolling Stones to Guns N Roses and even Penthouse Magazine haha, how diverse are the musical influences in the band from band member to band member?
It’s a wide range. 5 members and everyone have their own influences.  That’s what makes this band what it is. What is similar to everyone is that all of us like good old rock ‘n’ roll.

Here’s a chance to gaze into your crystal ball.  In the next 6 months Stala & So will have:
1. First European tour behind us
2. Songs for the upcoming album picked up
3. First international smash hit 🙂

Sounds like: “It’s a melodic hard rock with energy and good harmonies. It’s a combination of Kiss, Whitesnake and Europe.”