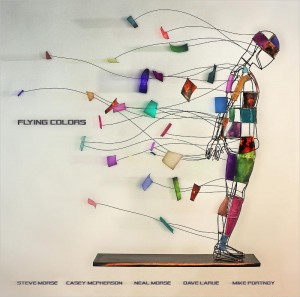 While the band name Flying Colors might be unfamiliar to you, the members of this rock supergroup have individually sold millions of records and strong fan base around the world. Flying Colors‘  self-titled  debut album is released today through Music Theories/Mascot Label Group/MRI.

The seeds of Flying Colors‘ formation were sown in 2008, when executive producer Bill Evans brought the idea to each of the musicians as well as to producer Peter Collins. Intrigued by the idea of working together, the four musicians wrote and recorded this album in just nine days.

Portnoy says “This album has bits and pieces of what you’d expect from each of us. The sum of all it’s parts led to brand new, uncharted territory for everyone involved.”

Dave LaRue says “It was quite an experience. The band moved at a fast pace, ideas flying around the room at all times. Sections of tunes were arranged, then rearranged. Ideas were tried every which way until we made them work, or in some cases, discarded them altogether. Just keeping track of everything was a challenge! It’s been an inspiring challenge melding folk, prog, pop and metal all into one big recording.”