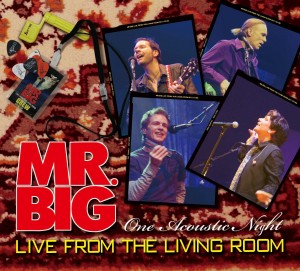 25 words or less: A nice addition to the hardcore Mr. Big fan’s collection and yet another display of one the most prodigiously talented hard rock bands to ever walk this earth.

Look, let’s cut straight to the chase as I know time is of the essence these days and most of you can probably only hold your attention span to read a maximum of 140 characters, so here goes….  Mr. Big’s Live From The Living Room is really only an essential listen if you are an existing Mr. Big fan.  If you have no idea who Mr. Big are, then this album isn’t for you, but if you are a fan and want to find out about this release and have another 250 words in you, keep reading…

Since the announcement of the formation of the original Mr. Big line up (Eric Martin, Pat Torpey, Billy Sheehan, Paul Gilbert), the band have released the hugely well received new studio album What If… The origins of this live acoustic release date back to the end of January 2011 in Japan, which is no surprise when it comes to Mr. Big given their insanely huge popularity over there.  Featuring 10 tracks in largely acoustic format, along with a string quintet, it’s the first time the band has attempted such a show, which might surprise some, given they are most famous for a simple little acoustic ballad some 20 odd years ago titled To Be With You.  This album features tracks largely made up from their most recent release What If… with only Take Cover, Voodoo Kiss and naturally To Be With You the older tracks that feature.  Yep that’s right, I know you too are wondering how could Green Tinted Sixties Mind be left out of the set, but it doesn’t appear.  However All The Way Up from the bands latest album is the highlight track on this release, simply awesome.

This is in no way is a definitive live release by any stretch of the imagination and if you are a true Mr.Big fan, you already have the likes of Japanedmonium or Back To Budokan don’t you?  Live From The Living Room is a nice little addition to the hardcore Mr. Big fan’s collection and yet another display of one the most prodigiously talented hard rock bands to ever walk this earth.

For fans of: Mr. Big