Mike Paradine, drummer from the traditional metal band ArcticFlame, has released his first solo album “Death In The Family“. A collection of personal songs, the subject matter consists of his on going feud with certain family members, growing up in the late 70’s, early 80’s in Bayonne, New Jersey, 9/11 and his battle with cancer as a 13 year old.

Though half the album is heavy metal, the remaining half consists of rock to hard rock styles. The music is influenced by bands that they grew up listening to, such as KISS, Deep Purple, Motorhead, Alice Cooper and Guns n Roses.

Tracklisting “Death In The Family”:

2. Rise Up from the Grave 03:44
Vocals: Michael Clayton Moore
Metal – my way of dealing with cancer when I was 13 years old

4. On a Tuesday Morning (The John J Harvey) 03:59
Vocals: Dave Manheim
Rock – Commercial song about a retired fire boat that played an integral role on 9/11

5. These are the Days 06:28
Vocals: Michael Clayton Moore, Backing vocals: Dave Manheim
Rock – About growing up in the late 70’s, early 80’s in Bayonne, New Jersey.

9. Bow Down to the Queen 04:20
Vocals: Richard Holmgren
Metal – song about my ex-sister 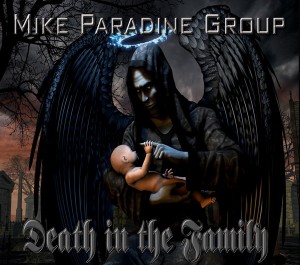 The album shines a spotlight on the thoughts, emotions and the humanity of one person, squashes it together into a tightly wound, barbed wire laced ball and sets it to music. All to the point of a really enjoyable album.

The album will be available digitally on iTunes, Rhapsody, Amazon etc. in a few days!