Dead Letter Circus (DLC) are pleased to announce the ‘SLEEPWALKER AUSTRALIAN TOUR 2012’ with amazing special guests Fair to Midland (USA) and Twelve Foot Ninja (AUS). The Sleeper tour will take in 20 dates right around the country and DLC have hand picked two of their favourite rocking bands to make every show anepic event. After touring the US late last year alongside Fair To Midland, DLC were blown away by their musicianship, killer songs, and high intensity show, and can’t wait to bring the guys to Australia.

The momentum keeps building for DLC in the US with several key rock radio stations adding their single ‘One Step’ to rotation, and the band hitting #5 on the Taking Off radio chart this week. DLC are heading back to the US for showcase performances at SxSW in Austin and then onto a US East Coast and Canadian tour throughout April, dates and venue info coming soon. The band’s US label Sumerian Records are thrilled with the early radio success and the growth of the band in the market, and are certain to capitalise on the buzz building around the Dead Letter Circus record.
Stay tuned for the release of a new single to be blasting the airwaves soon!

Tour tickets on sale from the 27th of February. www.deadlettercircus.com

Check out all the details on the poster below and via: http://deadlettercircus.oztix.com.au

FAIR TO MIDLAND
Founded in 1998 in the quiet farm town of Sulphur Springs, Texas, FAIR TO MIDLAND quickly became one of the Lone Star State’s fastest-rising bands, earning critical acclaim for their first two independent releases, 2001’s “The Carbon Copy Silver Lining” and the 2004 “inter.funda.stifle.” The band ended up catching the attention of System of a Down frontman, Serj Tankian, who quickly signed them to his label, Serjical Strike, and released the “Drawn & Quartered EP”. Six months later Universal Republic released the critically acclaimed “Fables From a Mayfly.” In summer of 2011 the band finally released the follow-up to “Fables” with the darker and harder hitting “Arrows & Anchors.” The band has shared the stage with bands such as the Karnivool, Smashing Pumpkins, Flyleaf, Chevelle, Dir en Grey, Alice In Chains, and Serj Tankian throughout the U.S. & Europe. This will be Fair to Midland’s first tour of Australia and the band are truly looking forward to meeting all their Aussie fans face-to-face. www.facebook.com/ftmband

TWELVE FOOT NINJA
Melbourne band Twelve Foot Ninja are fast becoming the ‘ones to watch’ in 2012 on the back of their awe-inspiring live shows and rising cult-like following. After two EPs (‘New Dawn’ and ‘Smoke Bomb’), the genre-bending band are set to unleash their debut album mid-year. For an insight into their live show, just ask US prog-metaljuggernauts Periphery who, following their recent sellout show with Twelve Foot Ninja and Tesseract (UK), posted this: “Twelve Foot Ninja are basically one of the best live bands I have ever seen in my life. Holy f*** they are tight.” www.facebook.com/twelvefootninja 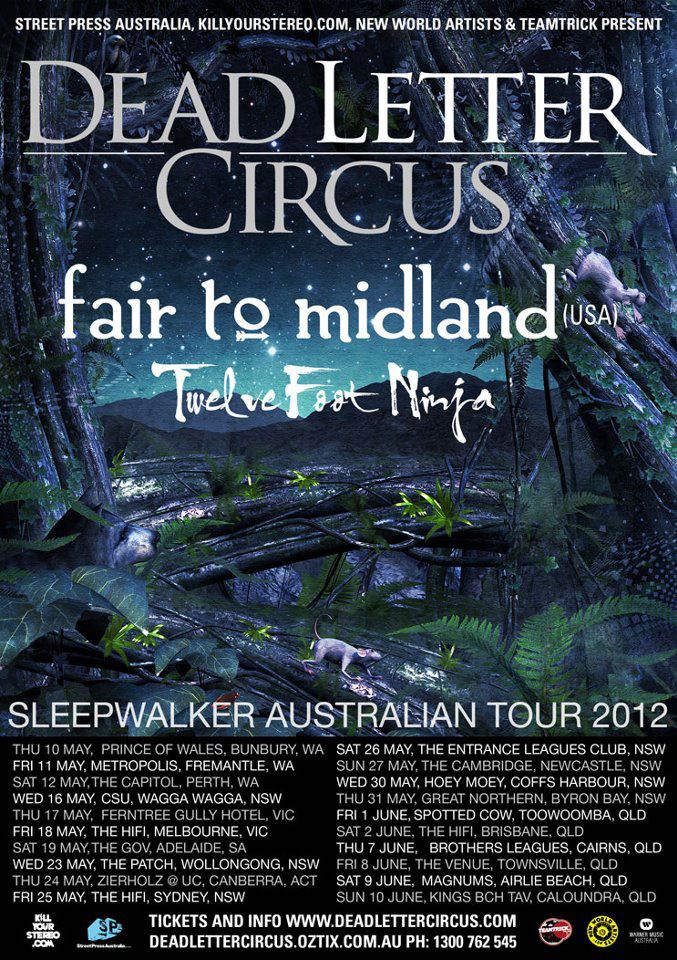