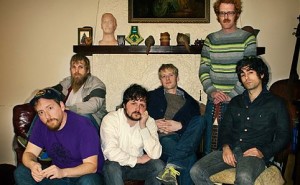 Thanks to our friends at Chugg Entertainment, we’ve got one double pass to giveaway at each of the upcoming Melbourne and Sydney shows by Northwestern USA alt-country rockers Blitzen Trapper who are headed out to Australia for appearances at the Bluesfest in Perth and Bluesfest in Byron Bay.
All you have to do to enter is simply email us mtrbwy@maytherockbewithyou.com your name and the show in the City which you would like to attend and we will contact you via email if you are one of the lucky winners!  Competition closes Friday 30th March.
Flannel-wearing alt-country Northwestern rockers Blitzen Trapper are returning to the Australia. Having announced dates on East Coast Bluesfest the band will also be appearing at West Coast Blues n Roots Festival and headline shows in Sydney and Melbourne.  The Portland, Oregon outfit released their third Sub Pop album American Goldwing in September through Inertia. The album was written and recorded in a span of six months, before touring globally, playing at iconic festivals such as Lollapalooza and Newport Folk Festival.According to vocalist Eric Earley, it was during this time the band realised this new album was extraordinary, referring to it as “the real record”.

“Sent their fans into a fit of delirium, as those in attendance begged and pleaded for more.” – Henry Hauser beatsperminute.com

“In an imaginary musical marriage, Led Zeppelin’s edge and Lynyrd Skynyrd’s folksy twangs had a baby. Taken a step further, that baby procreated with Tom Petty’s voice. BLITZEN TRAPPER would be the Led-Skynyrd grandchild’s name.” -MXDWN.COM

“EARLEY’s  solo highlighted the folk roots of the band’s music and resembled the soulful crooning of BOB DYLAN… BLITZEN TRAPPER displays a multi-faceted distinctiveness that translates into a truly superb live music experience…with each member of the band wielding different instruments throughout the entire set.”heyreverb.com