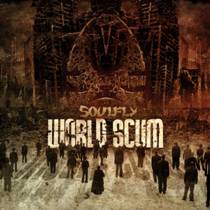 NEW SINGLE ‘WORLD SCUM’ RELEASED, FROM ‘ENSLAVED’
OUT ON MARCH 9