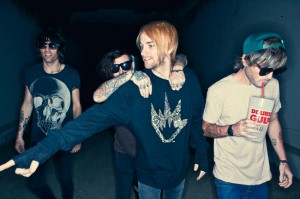 There aren’t many bands left these days who embody rock n’ roll’s raucous spirit, which is why the music of Dangerous! is more vital now than ever. This Australian act (the first ever to sign a worldwide deal with Epitaph) haven’t had a dull moment since forming in 2007 and with the release of their new album Teenage Rampage, the band—Tommy, Nicky, Jarrad & Liam—are poised to take over the world one power chord at a time.

Dangerous!’s debut disc was recorded in Los Angeles with Grammy-nominated producer Ulrich Wild (Deftones, Pantera), mixed by Marc McClusky (Weezer) and features 12 energetic anthems that are literally bursting at the seams with youthful enthusiasm. By combining the swagger of The Vines,  the edge of Guns N’ Roses and the energy of Australian rock icons like AC/DC, the band have created one of the most memorable albums in recent memory—a fact that makes perfect sense when you consider that they’ve spent the first half of their twenties on the road.

Dangerous! have played some of the biggest festivals in the world, including Sonisphere Festival and Download Festival in the UK (both in 2011), playing alongside acts such as Linkin Park, Bring Me The Horizon, Bullet For My Valentine, Weezer and Slipknot, followed a series of UK tour dates with Young Guns.

Teenage Rampage is a sonic explosion of the best elements of punk, indie rock and metal, all effortlessly wrapped up in one instantly infectious package. Lyrically Teenage Rampage is about youth, fun and individuality, subjects that the band hold true to their heart.

Catch the band as they make their away up and down the east coast of Australia,

“Their unique style reminds me of an early Vines but more dirty and sleazy. A dozen songs of great vocal stylings about youth, fun and individuality. These guys are the real deal. It’s the perfect balance of punk, classic rock and metal. This album has set the bar high for bands in this cross over of genres” 9/10 Australian Hysteria.

“The Adelaide act has a direct style that threatens the mainstream while straddling the independent fence. A classy debut from a promising outfit” – Music Australia Guide

“These Adelaide hipsters have some guts and gristle to their hardcore infected rawk. Tommy Lofts serrated scream rings all the right bells over this carnivorous carb heavy riffery” Zoo mag

“Fun loving, energetic Aussies Dangerous!, are bringing a party of Andrew W.K – like proportions to your doors, let them in. Shoes off though” Kerrang KKK

“Here it is, a new band with the potential to save rock’n’roll” – Fuze

“Dangerous! 2011’s hottest new band… This first single from the Aussie rockers is an explosive slice of garage punk’n’roll that proves exactly why they’ve been snapped up to release upcoming debut album “Teenage Rampage” through Epitaph” – Big Cheese

Teenage Rampage is out now on Epitaph Records.