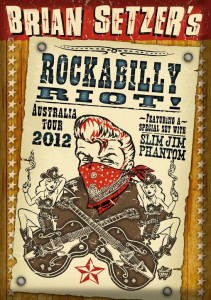 Dubbed ‘Brian Setzer’s Rockabilly Riot!’ this new look is an all-out assault on the rockabilly norm, an overcharged and thrilling attack of American rock n’ roll.

Setzer’s line-up includes: two (yes, two!) slappin’ stand-up bassists each bringing some extra thump to the party; two drummers – one being none other than Stray Cat Slim Jim Phantom – and a classic boogie-woogie piano that plays so well with Setzer’s rockin’ riffs.

The show will include all of Brian’s hits and originals, favourite covers, and a special set with Slim Jim and Brian together playing the legendary Stray Cats hits including ‘Rock This Town’, ‘Stray Cat Strut’, ‘Runaway Boys’ and many more!

The end of the show will be a never-before-seen all-out rockin’ extravaganza!!

After 43 years of honing his craft, Setzer is also releasing his first all-instrumental album ‘Setzer Goes Instru-MENTAL!’ (Surfdog Records).  The album showcases Setzer’s unique musical style that has made him one of the most legendary and credible artists in the industry today.