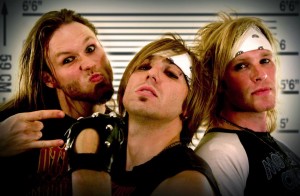 From Official Bio: Reverse Grip is a super high energy hard rock band formed by Dru, Sean and Dylan Broda, Three real Brothers from Toronto, Canada.  Living in Australia, Dru and Sean began writing music that would ultimately create Reverse Grip.  Sean had been playing guitar and had studied privately since he was 9 and his love for the face melting riffs of the 70’s and 80’s drove his passion to resurrect this lost art.  The desire to entertain and perform has always followed Sean’s brother Dru.  With his natural stage presence and bone chilling versatile voice, Dru was at home being up front and personal with job of Lead singer for GRIP.

After 4 years of touring North America with various respected rock Acts, such as The Mudmen and Broomfiller, the third and oldest brother, Dylan, joined the band in January 2011. Dylan’s wild, intense and original playing style has brought Reverse Grip stage show over the top!

Arrested for rocking Metallica, Iranian born Eskander Mirza slams the bass for the band with the skill and precision of most lead guitarists! “Easy E” has played all over the world and Reverse Grip is more than proud to have him.

Grip has released their debut EP, Nasty Reputation and their first official music video to back it up. Combined they have built a sound that can shake the gates of hell and won’t stop until everyone has been violated by Reverse Grip.

Let’s start with the basics first, when did the first band get together and how would you describe the music of Reverse Grip?
Dru: Well, the band actually originated in Surfers Paradise in Australia. Me and Sean had moved downunder but things didn’t really get going until we put Dylan behind the drums!! The guy’s an animal back there, literally!!! I’ve seen him take the form of some kind of wolf-like creature!!

Sean: I would describe it as being raped, but then u start to like it and have a sexual orgasm.

Eskander: I’m the bass player. A myth about me is that I’m related to these fuck’n assholes.

Dylan: I’m the Drummer and a fact about me is that one night I played a gig when I had the flu, but I wasn’t gonna change the way I play.  If you’ve seen me you know I head bang… a lot!  I remember looking up at the crowd and everything was spinning!! I turned to the side of me and just let loose this massive load of puke, covering myself!!  I puked about 10 more times and the crowd loved it!!

Dru: I’m The Lead singer of RG and a myth about me is I was once played Russian roulette in a Thai Opium den with a drug lord. I had been on a 4 day bender so I’m not sure, but other people claim it happened.

Featuring three brothers in the band, I have to ask was it always a childhood dream of yours growing up to play in a band together…or was that the last thing you ever expected to be doing as brothers?
Dylan: We’ve always wanted to do something together, we just were never sure what it was gonna be.  We all dream big and it just makes sense to be doing this together.  No one else we’ve ever played with gets it or want’s it as much as we all do.

You have twenty seconds in an elevator to try and convince someone to listen to your new EP, without resorting to threats or violence, what do you tell them?
Sean: If you wanna know what it’s like to have ear sex you should listen to our EP.

What or who inspires and influences your music the most, in both a lyrical and musical sense?
Dru: Well in a lyrical sense it would be our experiences.  We always write things based off an element of truth.

Dylan: Musically it would be the vibe and feel when we’re all together feeding off of each other’s attitude and energy.  So I guess we kinda inspire each other. 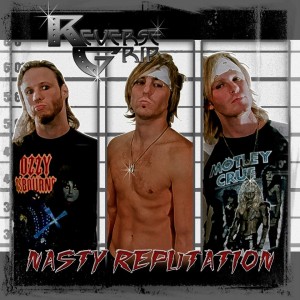 In terms of your song writing, what do you consider to be the most important ingredients that need to feature in a Reverse Grip song?…aside from lots of cowbell!
Sean: We always try and start with a good chorus hook and guitar riff.  Dru will always have a bunch of lyrics or melodies and we’ll match it with a new riff I’ve got. Dyl always irons out the kinks and ties the songs together.  We always want a big catchy chorus and normally if we achieve that the rest of the song falls into place around it.  It’s big vocals, killer riffs and a pounding back line all to make you ready to party!

Can we expect another EP release or even an album at some stage in 2012?
Dylan: We are planning to hit the studio again before the summer but we’re not sure if we’ll do another EP or full album just yet.  We’ve got tons of material to choose from.  We don’t want to stop any momentum so we have to be coming out with something new all the time.  You can easily be forgotten about if you’re off the map for even a month.

With an EP full of rock n roll debauchery, is it dumb of me to ask what kind of movie soundtrack you think your music is suited too?  Or should we just watch your music video for Nasty Reputation for a hint at what kind of movie it is likely to be?
Dru: I see it as the sound track to some kind of Biker Gang movie with tons of sex, drugs, and killing.  Something like Sons of Anarchy I guess.

If you were a person in the crowd at one of your gigs, what five words would you walk away using to describe the performance you just witnessed?
Sean: Huh, I would have to say sex, energy, raw, passion, and entertaining.

Speaking of gigs, I read that you are planning a trip to Japan later this year.  Has there been a bunch of International interest in the band so far and what’s the plan for global domination?
Dylan: That’s right, RG is going to Japan in September for a 3 week tour.   We’ve had tons of interest,  RG has been embraced worldwide.  We love all the fan support, it’s so wild to have fan all over the globe.  After Japan we’ve been in talks to tour Australia and Europe.  As for “global domination” we plan on infecting every country we enter.

Over here in Australia, the common person on the street if asked to name some Canadian rock bands would be likely to answer with Nickelback, Simple Plan and Bryan Adams!  Here’s your chance to set them straight, what is the Canadian rock scene really like at the moment?
Dru: It’s exactly that, a lot of people sound like those bands.  It’s shit but it’s good for us cause we stand out when we play.  I’ve been saying it for a while now, people want to go to a show to see a “show”, not to see some guys or girls stand around and sing about how boring they are.  This is one of the reasons why we’re playing outside of Canada, the industry here doesn’t support real rock n’ roll.  I could go on forever…

With 2012 only being a few days old, here’s a chance to gaze into your crystal ball. By the end of 2012, Reverse Grip will have:
Dylan: 1.Toured Japan and Europe
Dru: 2.Played to sold out crowds
Sean: 3. Saved Rock n’ Roll