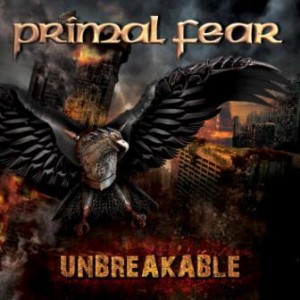 In 25 words or less: During 2012 I doubt there will be many releases which will top Unbreakable for sheer METAL brilliance and enjoyment, an essential listen for any true heavy metal fan!

Well what a way to kick off the year with this mighty slab of metal from Primal Fear titled Unbreakable, the bands ninth release.  I know this comment may appear a bit flippant being said on January 20th, but this is unquestionably the greatest metal album released so far in 2012 and one that I personally will find very hard to top for sheer enjoyment.  Spending two years touring relentlessly afforded Primal Fear an opportunity to re-evaluate and where past albums such as their 2009 release 16.6 (Before The Devil Knows You’re Dead) may have tinkered around the edges, on Unbreakable, the band have simply delivered an album of monstrous metal anthems.

Seriously, in the opening five songs Strike, Give Em Hell, first single, Bad Guys Wear Black, the frenetic And Then There Was Silence and Metal Nation I personally couldn’t possibly wish for much more as far as pure metal anthems go?  There’s no way I can resist a chorus of “bang your head and never turn it down, bang your head, bad guys wear black….” when the distinctive vocals of Ralf Scheepers are in top flight.  Monster riffs are in abundance courtesy of the dual guitar attack of Alex Beyrodt and Magnus Karlsson and the production courtesy of bass player Matt Sinner is massive, as are the drums of Randy Black.  Where Angels Die is a soaring 8 minute epic, whilst the majestic Born Again is another that despite a slower tempo, is just as powerful as their more bombastic counterparts that fill the album.

From the instrumental opening track Unbreakable (Part 1) right through to closing track Conviction there is not one moment of this album that I didn’t enjoy…even after what must be close to 15 or so listens.  In this day and age, the term “METAL” is often very loosely bandied around, but make no mistake, this is what “METAL” is all about people.  During 2012 I doubt there will be many releases which will top Unbreakable for sheer METAL brilliance and enjoyment,  an essential listen for any true heavy metal fan!