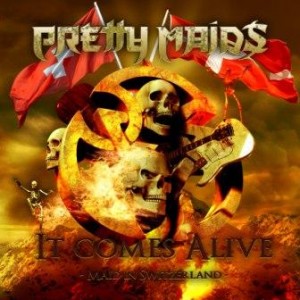 Frontiers Records is pleased to celebrate PRETTY MAIDS’ Thirtieth Anniversary with the release of the band’s first ever live 2CD/DVD package entitled “It Comes Alive (Maid in Switzerland)” on March 23rd in Europe and March 27th in North America.

Following the highly acclaimed 2010 album “Pandemonium”, Danish melodic hard rockers, Pretty Maids have been touring more or less constantly throughout 2010/2011. They undertook a full scale European tour in 2010 and have since played several festivals and occasional gigs. The overwhelming response to the new songs and the ongoing requests coming from the fans prompted the band to take their chance and record a live 2CD/DVD last October 1st 2011. Pretty Maids gathered in Pratteln, Switzerland with an enthusiastic and highly explosive crowd of die hard fans and followers to fulfill the demand, for an energetic and memorable performance which was recorded with a fully equipped mobile studio and cameras.

“Riding on the success of our previous studio album Pandemonium and with maybe the strongest line up ever, we thought that we’d make some kind of a live document of what this band is all about in the present time” tells singer Ronnie Atkins. “It Comes Alive is purely and simply a tribute to all our fans and supporters throughout the world, who gave us so many memorable moments, so much pleasure and making our childhood dreams come through”.

“The band’s spirit during the last couple of years has been better than in a long long time” says Atkins. And “It Comes Alive (Maid in Switzerland)” shows the band at the top of their game, performing songs from a 30 year long career.

“It’s always difficult to make a set list that satisfies everyone” continues the singer, “It’s a combination of what the crowd expect us to play and what we like to play ourselves ! But of course there are songs like Futureworld and Red hot and heavy that we have been playing for the last 25 years so, they still get a new life every time we play ‘em and still seem to please our audience. But basically what you will find on this Live album are the songs that we toured with on the Pandemonium tour, with a few exceptions”.

“It Comes Alive (Maid in Switzerland)” captures Pretty Maids in their finest moment, Live on stage – In your face ! It’s party time, so just: TURN UP THE VOLUME !