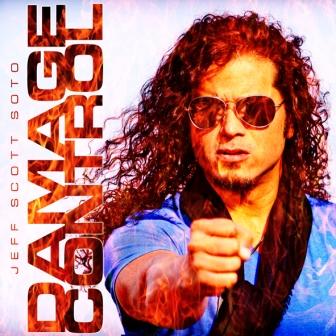 Extraordinary performer and amazing vocalist throughout, Jeff Scott Soto blasts through these hard rocking tracks with energy and masters the transition smoothly from heavy rock to a delicate ballad. For his new album “Damage Control”, Jeff has turned to many of his past influences and most requested aspects of his career by blending the art of Melodic Rock with Hard Rock throughout.

“I feel Damage Control is more of a return to what my fans would expect to hear from me. It’s a perfect blend of my first two solo albums with Frontiers Records; Prism and Lost in the Translation, but also mixes in some of my favorite moments of my past bands such as Talisman and Soul SirkUS” tells Jeff. “It is heavy, AOR, hard rock with loads of great riffs and melodies”

“Damage Control” was recorded in the fall of 2011 and is completed with appearances and co-writing along with his former and current band mates together with many guests including Jamie Borger and Nalley Påhlsson (Treat), Casey Grillo (Kamelot), Joel Hoekstra (Night Ranger) and legendary Y&T founding member Dave Meniketti. Jeff recalls: “Y&T drummer Mike Vanderhule played drums on a track and suggested I bring Dave on but, as he is a long time friend and one on the ‘wish list’ of people I would have loved to have, I didn’t want to get an excuse that he was too busy or not interested, to my surprise I got neither… he was willing to do it and I was not only grateful but beyond pleased to work with another musical hero!”

The album will be released in two exclusive configurations; the basic version in CD jewel box will include 11 songs, while the deluxe edition in digipak format has an additional 3 bonus tracks and a DVD. Full tracklisting:  CD: Give A Little More, Damage Control, Look Inside Your Heart, Die A Little, Take U Down*, If I Never Let Her Go, Tears That I Cry, BonaFide, Elena*, Krazy World, How To Love Again, AfterWorld, NeverEnding War, Afraid To Die* * Bonus tracks only available on the Deluxe Edition.

Jeff Scott Soto is currently planning tour dates that will support the release of the new record: “The plan is to do as much touring as possible wherever the World will have me. I plan to promote this album with a proper touring regiment!” concludes Jeff. Get ready for “Damage Control”, it will rock your World!

The first single “Look Inside Your Heart” can be streamed in full on Frontiers Records’ webradio: www.frontiers.it/webradio.  Check out the trailer below.