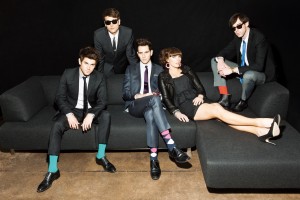 He couldn’t have been more wrong. Nor could he have predicted just how much of his owns band’s career would defy that philosophy. COBRA STARSHIP’s 4th studio album ‘Night Shades’ has spawned some of their most acclaimed work to date and “screams ‘party’ right from blast off”. – Rock Sound

With a string of previous sold out Australian shows in the bag, COBRA STARSHIP returns playing two exclusive Sidwaves in Sydney and Melbourne. “With true showmanship the band blisters through their set list of dance floor anthems leaving, as far as pop punk goes, one hard act to follow.” – Rave Magazine

With a platinum selling hit ‘Jumpstart’ under their belt and their infectious sing –along dance pop songs, THESE KIDS WEAR CROWNS are winning hearts and taking over the airwaves throughout the world.  As bassist Alan Poettcker enthuses “We want everyone to get on their feet and dance when they hear our songs”.

Earmarked as ‘the future of rock’ by smashing pumpkins front man Billy Corgan, KILL HANNAH pushes the listener into every emotional corner with hauntingly beautiful, dark and heartfelt reflections.  ‘Wake Up The Sleepers’ KILL HANNAH’s latest effort solidifies their status as true visionaries with Kerrang! calling it their “finest hour” 4/5.