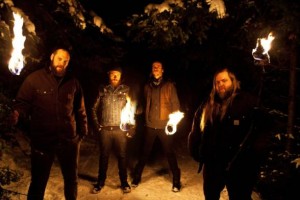 Two-time JUNO-nominated CANCER BATS will release their fourth full-length album Dead Set On Living, on April 20, 2012 through Shock Records in Australia and NZ. Once again utilizing the legendary Vespa Studios and producers Eric Ratz and Kenny Luong, Dead Set On Living brings yet another dimension to the Bats’ menacing style of thrash-tinged hardcore rock.

“We really strived for that raw, off-the-floor vibe this time around,” begins CANCER BATS vocalist Liam Cormier. “It’s really the bridge between our live show and what we put on record.”

Tracks like “R.A.T.S.” (Featuring guest vocals from Rob Urbinati of Sacrifice) and “The Void” are laced with the gritty, sludgy groove that first emerged on cuts from 2008’s Hail Destroyer, while the blistering first single “Old Blood” roars with the riot-inducing speed and aggression so familiar to the band’s fans. The blazing “Bastards!” also features vocal boosts from DevilDriver’s Dez Fafara and An Horse’s Kate Cooper.

“We’ve been very lucky to experiment as much as we have,” Cormier offers, crediting the band’s loyal following for their fortune. “I love that we can have thrash songs, hardcore songs, and the more Queens of the Stone Age or Kyuss kind of groove-based tunes.”

Thematically, the album offers a strong focus on the bilateral relationship of dark and light, destruction and construction, life and death. The title track, for example, refers to a close friend of the band who ended up in the hospital in serious condition; only to have the experience cement his will to survive. “Road Sick,” as the title may imply, finds Cormier struggling with the hardships that come with a career spent on the road. “Our lives are all about touring, but that song is more universal,” Cormier reveals. “It’s really for anyone away from their loved ones, dealing with that situation.”

Still, whereas 2010’s Bears, Mayors, Scraps & Bones had a much darker tinge, DSOL strikes a tighter balance between the opposing forces and brings listeners closer to the light at the end of the tunnel by encouraging them to push through peril. “We all reach these dark places where we feel angry or alone,” says the singer, “but that gives us a reason to pick ourselves up and strive to make something better.”

Since first turning heads with 2006’s Birthing The Giant, CANCER BATS, made up of Liam Cormier (vocals), Scott Middleton (Guitar), Mike Peters (drums) and Jaye Schwarzer (bass) are one of the hardest working bands in the music industry. The band spent close to 300 days away from home in 2011, and will likely come close to that in 2012.

The CANCER BATS recently revealed to fans that on April 21, 2012 in London, UK, they would play six shows in five different venues, all within the space of 24 hours. Dubbed the ‘Pentagram’ tour (the location of the venues when joined together form the shape of a pentagram), all six shows sold out in the first week. A spring cross-Canada tour in support of DSOL is in the works, with dates to be announced soon.

For More Information on the CANCER BATS visit:
www.cancerbats.com | www.myspace.com/cancerbats