‘Rockstar Productions’ in conjunction with ‘Riot! Entertainment’, ‘Metal Massacre.com.au‘  and ‘Metal Obsession.net‘ present the return to Australian shores of one of the most popular and charismatic acts of the genre; AMON AMARTH!

The ‘Guardians of Asgard’ are gracing our shores for the first time since their almost sold out national tour of Australia of 2009. Performing tracks of their latest chart busting album ‘Surtur Rising’ along with all the fan favourites, this tour has every indication that it will go the distance and perform to full houses in every venue. Well renowned to be one of the best live acts on the circuit, Amon Amarth never let their fans down and each show is nothing short of an adrenaline packed power punch to the solar plexus!

Having that truly unique ability to have a tremendous genre cross over fan base the band has a diehard following. What’s not to like about Amon Amarth? Each album and each track has overwhelming appeal and one cannot help but to like, admire and crave more from these Viking Gods! Their latest album, ‘Surtur Rising’ offers ten tracks of fist-raising, peckflexing, hyper climactic fight anthems led by the fiery lungs of Johan Hegg, searing rhythms and a volatile twin riff assault with a courser, more organic-sounding production to add more depth to their already consuming tone. Each track writhes under the weight of  its own valiant heaviness with the band’s signature Viking themes pulling it all together.

Supported by two of the most popular, talented, young and upcoming acts coming out of Australia, ‘Orpheus’ (not in Perth), + ‘Eye Of The Enemy’ (not in Adelaide/Perth) this tour will be the opportunity to see and partake in an experience that will be life lasting and one that will forever be replayed and stored in each patrons memory bank.

What are you waiting for? Join the Norsemen on their Viking Assault of Australia and be part of the conquest in every capital city this April!

Tickets available from the Metal Massacre site on the ‘Back in Stock’ and ‘New Release’ sections NOW. Get the jump on the rest of Australia as tickets from venues and outlets will not go on sale until late in the week commencing 30th Jan! 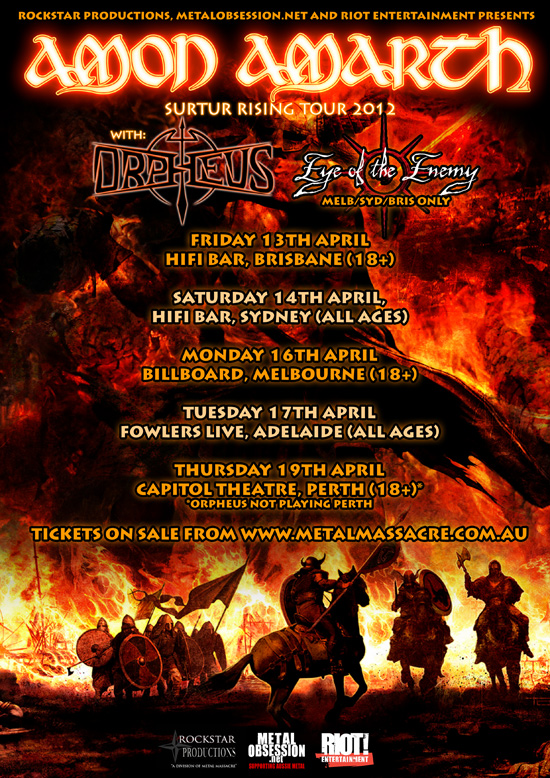