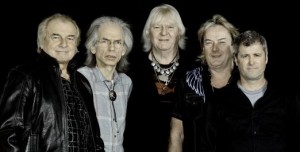 Returning for the first time since 2005, Grammy Award winning prog-rock group, YES, will be making their highly anticipated return to Australian shores in April 2012 for a few very special theatre shows and a performance at the infamous Byron Bay Bluesfest.

The tour kicks off in Byron Bay when they take the stage at Bluesfest on Monday 9 April, before heading down to Melbourne for a show at the Palais Theatre on Wednesday 11 April and then winding up in Sydney on Friday 13 April at the State Theatre.

Forming in London in the late 1960s, YES are regarded as one of the pioneers of the progressive genre.  They are known for their classically-influenced arrangements with extended song lengths, unusual time signatures, three-part high vocal harmonies, virtuoso musicianship, eclectic blend of musical styles, dramatic dynamic and metrical changes, abstract lyrics, elaborate album art and enigmatic live stage performances.

Having sold close to 50 million albums worldwide, their status as one of the most successful bands in America throughout the 1970s was solidified when four of their albums were certified Platinum and another three albums reached Gold status.  And their number one hit single, Owner Of A Lonely Heart, held the top spot on the main charts in 1983 as well as becoming a hit on the R&B and disco charts.

And more than 40 years since their inception, audiences will be able to see YES perform tracks from their indelible catalogue of hugely successful hit albums, such as Fragile, Close To The Edge, Drama and 90125.

Do not miss the chance to see this very special show.

TICKETS FOR ALL HEADLINE SHOWS ON SALE 9AM, FRIDAY 16 DECEMBER