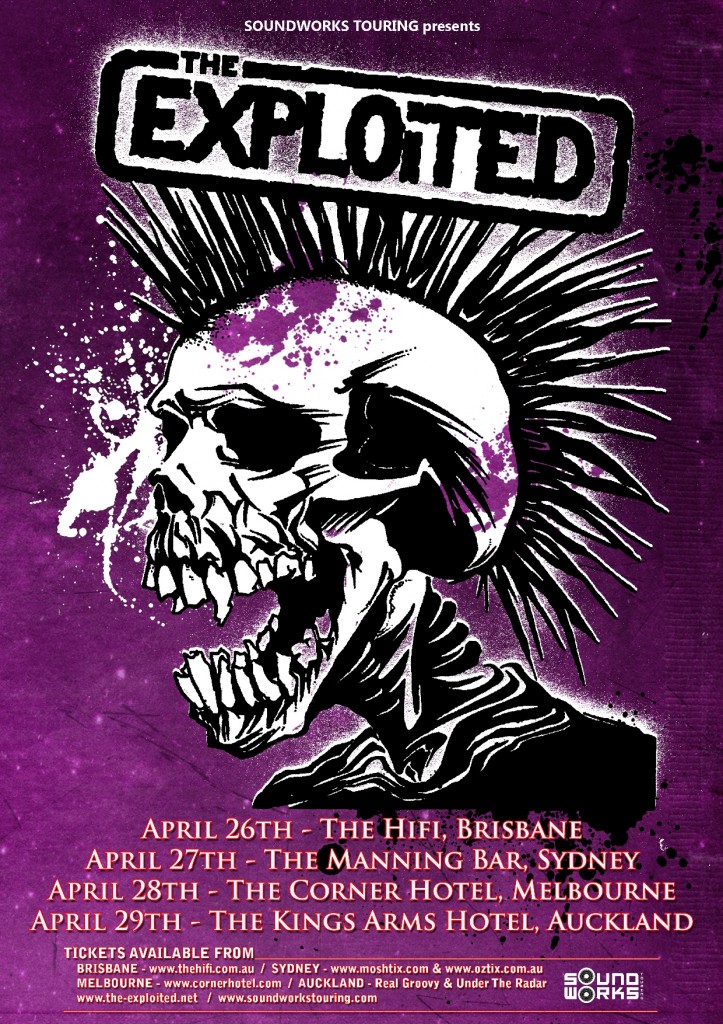 Formed in 1979, the quartet created a simple, no-frills sound characterized by speed and aggression.   Led by vocalist Wattie Buchan, The Exploited is one of the UK’s most politically outspoken thrash bands, who has built a strong and loyal following both at home and abroad for its anti-authoritarian stance and criticism of the government, particularly in the Reagan/Thatcher era.

1982 saw the release of The Exploited’s first genuine classic album ‘Troops Of Tomorrow’ (#17), which ten years later was to see a medley of three tracks (most notably ‘UK82’ changed to ‘LA92’)covered by thrash metal band, Slayer, and US rapper Ice-T, for the ‘Judgement Night’ soundtrack. The homage was just further proof of the immeasurable influence that punk bands like The Exploited have had on the thrash metal scene.  In fact, it can be argued that without them, there would be no Metallica, Slayer or Slipknot.

In over two decades The Exploited have been tear gassed by German cops, banned from Holland, arrested in Spain, declared that the Falklands are British forever whilst on stage in Argentina and have caused more carnage than a multi-car pile up on the M1. Throughout that time they have remained steadfastly true to their roots, never selling out, never splitting up (despite numerous line-up changes) and never bowing down. They’ve been accused of being dumb (yes, sometimes, but wilfully so) and causing trouble (guilty again, but smashing stuff is fun and punks are supposed to be obnoxious). ButThe Exploited are also fiercely (not to mention bluntly) socially and politically aware, covering everything from the Criminal Justice Act to the increasing use of Big Brother CCTV and never wavering from their anti-authoritarian, anti-war stance.

Don’t miss The Exploited when they tear up Australia and New Zealand in April.