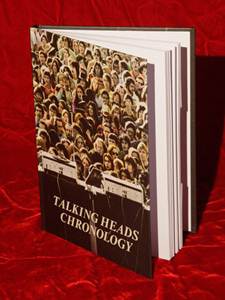 Though it may not seem it, this little project took years to pull together. I had seen much of this footage, and realized there might be an interesting video timeline of the various manifestations Talking Heads went through. But, tracking down all of the owners of these bits of footage and followed by getting the rights of the material was another matter. Some of the early clips were obviously not commercial—the sound and image can be a little rough in those—but you can see the extremely stripped down version of the band playing at CBGB in those days. These bits and pieces of footage coming together into a cohesive chronology morphed into something very different and impossible to predict.

This was very much a live band—at least until the late 80s. The initial recordings emerged out of what we played live, what worked in that context and how we refined our skills playing together. For a lot of musicians in the digital era this is not always the case. These days, the record often comes first and then how it is staged comes later. The Lester Bangs essay is also very much part of this time. Other than some very specific references, it holds up amazingly well as a passionate and idiosyncratic piece of writing. There’s a reason a lot of writers continue to hold him up as a role model (though I hope they bypass some of the substance abuse). Though his piece is in the form of a record review, it is in truth a beautiful existential rant—and I am proud to be in some way associated with it. Come to think of it, maybe many of these songs are partly something else in disguise as well?

With each iteration of Chronology, you can pretty plainly see what came before as well as a hint of what was to come—all easy to spot in retrospect, of course. There are some fashion don’ts as well as some prescient looks—but what you really get is a sense of how tight this band was. Of course, there is more footage to be found from these sources but I thought to myself, “How many versions of the same songs can one view?” I think the sampler approach gives the viewer a sense of the musical and performative changes we were going through, but without the possibly tedious repetition.

This Limited Edition EXCLUSIVE to JB HI-FI comes packaged with a hardback cover with a 48 page book containing photographs and an unexpurgated Lester Bangs essay written as a review of the ‘Fear Of Music’ album for The Village Voice in 1979, but only ever published in a heavily edited version.

Chronology pulls together live performances from across Talking Heads’ career. It starts with their earliest days at CBGB and The Kitchen in New York City in the mid-seventies, through their breakthrough years in the late seventies and on to global success in the eighties. They completed their last tour in 1983 although they would continue to make very successful albums throughout the eighties before officially breaking up in 1991. The DVD concludes with their “reunion” performance of ‘Life During Wartime’ on their induction into the Rock ‘n’ Roll Hall Of Fame in 2002.