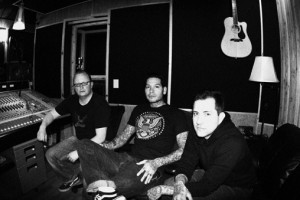 Mike Herrera, Tom Wisniewski, and Yuri Ruley who together make up legendary US punk rock trio, MxPx, have signed to El Shaddai Records for the Australian & New Zealand release of their next two projects. Label President Phil Kennedy commented “Having been fans of the band since the mid 90s we are super thrilled to be working with them.”

El Shaddai Records will release a music documentary entitled Both Ends Burning, featuring footage from the band’s 2008 world tour all the way to the band’s sold-out Seattle show in March 2011. In this brutally honest depiction of the band, MxPx finds themselves at a crossroads in their career, struggling to find the balance between full time jobs, and the life of a touring musician. Directed by Bryan Buchelt of Snaproll Studios, the DVD will be available digitally in January 2012 and physically shortly after.

The DVD also includes interviews with friends and peers of the band such as Ethan Luck (Relient K), Stephen Egerton (Descendants), Jeremy McKinnon (A Day To Remember), Chris Demakes (Less Than Jake), along with many more, who add their individual anecdotes to the story, collectively agreeing on how influential the band has been and the true legacy the band has built over the last two decades.

Since the release of their third album Life In General in 1996, which launched them to success with hits “Chick Magnet,” “Move To Bremerton,” and “Doing Time,” MxPx has been on the road constantly, touring first across the country and then around the world. Touring since the age of 15, they’ve weathered the trials of friendship and the pressure of performing every night. However, the love/hate relationship of their friendship has endured in tight quarters, and the unexpected experience touring the world brings has reaffirmed of the legacy MxPx has built within the last 19 years since forming (and still being based) in Bremerton Washington.

A documentary about both life and music, Both Ends Burning is both a realization of how far the band has come, and how much further they want to go. Nearing two decades of playing together, it was late 2010 when drummer Yuri Ruley questioned being in the band and performed what he thought would be his last performance as a full-time member of MxPx at Wasted Space in The Hard Rock Cafe, Las Vegas. At the same time, guitarist Tom Wisniewski turned in his part-time status as well, taking on a full-time job in Bremerton.

But playing that show in Las Vegas provided more than a chance to reminisce about the past through their first full Life In General live set, the sold-out show helped rekindling the spark of creativity, reaffirming that Ruley and Wisniewski would continue with the band but would drastically scale back on touring. Both have since remained members of the band and are currently in the studio with vocalist and bassist, Mike Herrera finishing up their 9th full-length album, to be released in March 24, 2012.

After writing over 20 songs for the offering, MxPx whittled down the selection to 14 (one being exclusively for Australian & New Zealand editions of the album). Herrera is self-producing the album and said, “I’ve put an immense amount of thought into the bass lines this time around. I’ve expanded the fills and changed them up here and there, which has been fun.” Adhering to their own schedule, each and every detail is being perfected for the best MxPx album yet.

The album is the formal follow-up to 2007’s Secret Weapon and it’s something of a triumphant return to form for the band. Self-produced by Herrera at his Monkey Trench Studios in their hometown Bremerton, the new material channels the fire and fervor of their classic album Life In General as well as Secret Weapon’s scope and sense of refinement for a combustible new combination. With Yuri Ruley having returned to the fold, the band have wrapped up guitars, bass, vocals and now are putting the final touches in the record in time for its March 24 release date.

MxPx are roaring back to life. Stay tuned for what’s to come…