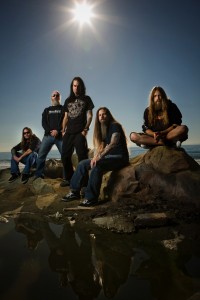 Ghost Walking is the hard-hitting first single from Resolution, Lamb Of God’s seventh studio album. Resolution is out on January 20 through Roadrunner Records

Resolution is the follow up to their Grammy nominated album Wrath. Produced by Josh Wilbur, the album will feature 14 songs and will come in a digipak with artwork by longtime art director Ken Adams.  The album was recorded in various studios in Virginia and New York.

Watch the trailers below:

Lamb of God are touring Australia as part of Soundwave Festival 2012 and also have Sidewaves announced with In Flames and The Black Dahlia Murder, in Canberra and Brisbane.