Official Press Release:
“It’s been over three years since rock group Antiskeptic finished up after a ten year career that spanned a massive 1,000 shows nationally and internationally with bands such as Jimmy Eat World, Unwritten Law, Millencolin, MxPx, Jebediah, Pacifier, Missy Higgins, Motor Ace, Bodyjar, Midnight Oil and Eskimo Joe as well as playing on the bill of such well respected festivals as Vans Warped Tour, M-ONE, Homebake and the Falls Festival. So it is with HUGE excitement that we can announce the return of this much loved Melbourne band.

Formed in the late ’90s, Antiskeptic quickly rose to prominence through the strength of their energetic live shows and acclaimed recorded material. Hard working and independent the band self financed numerous EPs and albums, including the classics – ‘Memoirs of a Common Man’, ‘Aurora’ and ‘Monuments’.

Brimming with an optimism so often missing from alternative music, Antiskeptic’s unique blend of anthemic and melodic rock cemented their position as one of the country’s finest live acts.

With new material, an expanded lineup and a newfound fire and passion burning brighter than ever, this is not just a reunion show – ANTISKEPTIC ARE BACK and set to wow Australian punters once again.”

We hunted down Antiskeptic lead vocalist Andrew Kitchen to fill us in on the newly released Goodbye Goodnight Live at The HiFi 2008, the return of the band and it’s new lineup and their first tour in over 3 years titled the Back In The Game Tour!

Hey guys, well “welcome back” and congratulations on the recent live DVD/CD release “Goodbye Goodnight”!
Thank you – good to be back and thinking music and songs and gigs again. It’s all the more exciting the second time around.

So, an obvious first question, what was the catalyst for bringing the band back?
We did a reunion show in April for a bit of a laugh and it sold out in the first 48 hours or thereabouts!! We were amazed at the response. At the gig we had an utter blast and kept talking about possibilities moving forward. And here we are!!

How has the response been to the announcement of your return and the shows?
Really good actually. A lot of people whose faces and names I don’t know are leaving comments about how this is the best news all year and that they are pumped etc. We’ve sold a good lot of tickets already, so that’s a great sign too.

Whilst Antiskeptic obviously has a strong legacy, do you feel like it will be almost like starting a brand new band again?
Not really. It feels very much like the natural progression as per the direction we were going to be honest.

A few notable differences with the band in 2011 is you are now a four piece and the absence of bassist Sean Daly. Can you comment on the lineup as we see it in 2011?
After much talks and soul searching, it was clear to all that Nick and I were on the same page and Sean wasn’t unfortunately. Musically we were, but it was a priorities thing – that’s what it boils down to. I’m really pleased that we were able to play with Sean for so many years, who in my opinion is one of the finest rock bass players in Australia … but I’m equally excited about the future and what it might hold for the new line-up.

We’re pumped about getting Ryan and Tavis on board. They are really good lads and we’re pumped to be working with them. They bring a bunch of different influences and creative drive with them – so I can’t wait to really tap into that and see where the dynamic leads the band.

The legacy of Antiskeptic was important for Nick and I, so we didn’t just want to come back with a ‘new Sean’ … we wanted to come back (literally) BIGGER and better than ever before. I’ve quite often watched footage of Antiskeptic and the amount of time that I have to spend at the mic or on guitar always strikes me. I often thought that another axe up there would have been awesome.

It’s been around three years since the band disbanded, after 10 years and over 1,000 shows, what was the overwhelming reasoning for retiring the band in 2008?
I think the band just needed a rest. In the years between 1999 and 2008, I don’t think there would have been much more than a matter of weeks (maybe a month) between gigs or recording commitments. Perhaps we should have put some time off in there and not abandoned our friends and lives so much to pursue the rock dream.

So what have you guys been largely up to in the years since that last show and now? Have you had any involvement in music whatsoever?
Well I’ve had 3 kids!! One I had at the end of the band, but he was only a tiny guy. I have actually been working away at The Push (www.thepush.com.au) and running a music industron conference called ‘Face The Music’ (www.facethemusic.org.au). So yes … involved in music. Nicko’s been busy keeping up with fashion and doing his hair.

What was the biggest thing you have missed in the 3 years that the band hasn’t been together?
Mateship … honestly. I realised just how much I relied on the band for ‘male time’ … haha.

So for those reading this who may have missed you the first time, can you give a brief introduction to what Antiskeptic is all about musically?
Imagine a band that is infatuated with choruses and big hooks … then introduce that band to Marshall guitar amplifiers and big room drums. That’s us. Oh – and we like to dabble in the dark arts of time signatures and such.

What are some of the most notable changes you feel have happened in the Australian musical landscape in your absence?
The importance of online presence and activity.  3 years ago an audience wanted you writing songs for a new album. Now they want us to be posting what we’re eating for breakfast.

Do you feel that there is one particular album/EP that best represents what Antiskeptic is all about musically?
The live DVD. Hands down. Easily the best Antiskeptic release.

Looking back over the first chapter of the band, what do you think were some of the biggest challenges you had to overcome and greatest learning experiences?
Probably getting along with each other and remaining inspired and creative in the midst of all of the business decisions that need to happen to keep the show on the road. The greatest learning experience happened for me every time I went into a rehearsal studio with a new song … and I witnessed first-hand how rad my band mates were at bringing a song to life.

You have just released the DVD “Goodbye Goodnight”, which captures your last show at the Hi-Fi Bar in 2008…what are some of your most overwhelming thoughts reflecting back/watching that show now?
I remember thinking that it was really, really intense.

These are the things going on in my mind:

I can’t believe this is our last show.

I shouldn’t have eaten Indian before walking on stage.

I hope the recording is sounding good.

Man … I REALLY want to go crazy, but if I do, the audio recording will suffer.

Am I going to cry in the last song?

What am I going to eat after this?

I can’t believe that all of these people are here to see us?

As you write new songs and with the introduction of a new dynamic in the band that comes with 2 new band members…how would you compare where you are at musically in 2011 to your earlier material?
I would say that in 2008, I was really keen to explore more and more dynamics in songs and take people on narrative journeys with each song. I’m amazed and pumped that I get the chance to do it again. So I would say expect more width, depth, height and bredth in the songs. And definitely more rock moves … perhaps I get the younger recruits to do all the splits and high kicks though.

Over the next 6 months what are the future plans for the band, you have some shows booked in February…then beyond that is the plan to continue writing and recording new material?
Yes … new material is being discussed and songs are flying back and forth between members. We’re talking about late 2012 for a few singles.

If anything I’ve learnt in the last 3 years … it is a real pleasure to be in a band and people paying good money to come and see you perform is just such an incredible thing that I should have never taken for granted.

Catch Antiskeptic on their first tour in over 3 years titled the Back In The Game Tour. With Very Special Guests: Move To Strike (SA) & Emperors (WA).  Proudly presented by killyourstereo.com & theAUreview.com

Watch ‘Called’ from the newly released ‘Goodbye Goodnight Live at The HiFi 2008’ DVD/CD: 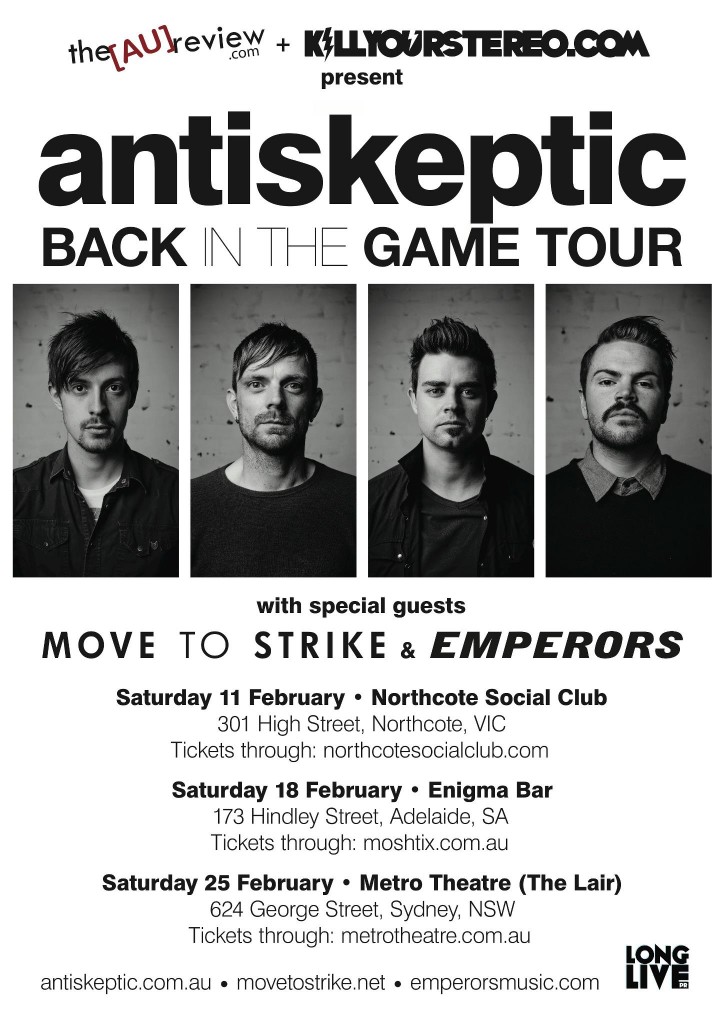