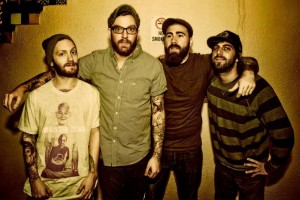 “We’ve always wanted the same thing.  We just want to be a band and play music because it’s fun and that’s what we like to do!”

From their formative years growing up in the thick of the Massachusetts hardcore scene, through to delivering their energetic mix of pop punk mixed with hardcore, Four Year Strong have been doing their thing for 10 years now, in fact they recently celebrated the 10th anniversary of their first ever show.  With their new album In Some Way, Shape, Or Form having been released a few weeks ago, you can bet that there will be a swag of new songs to grace your ears when the band hit Australia for Soundwave 2012.  We recently chatted with guitarist Alan Day about the new album, random objects and heading back to Australia!

Hey Alan, thanks for taking the time to chat today.  Your new album In Some Way, Shape, Or Form was released a few weeks ago, how has the reaction to that been so far from the fans?
It’s been going well so far!  As you said we just released it a few weeks ago and it’s always hard to tell straight away but we mixed in a few songs into the set on our recent tour.  It was going down really well and it mixed in well with our older material as well and I think that’s what some fans were a bit iffy about, the new material and how it would meld in with the rest.  But actually it worked out really well.

Musically, this is a bit of a different album for the band, compared to past releases…behind the scenes, did this also translate into a different writing and recording process as well?
It was definitely a lot different.  The writing process specifically was a lot different as we took a different approach this time.  In the past we’ve always written all of the music, every little piece of detail….and then we would write vocals on top of it and that’s kind of how we’ve always done it.  This time we took a different approach and tried to write the vocals, melodies, lyrics and music all at the same time.  So it was kind of changing stuff, when something else would change and adjust during the whole process, rather than say having parts already done and finished.  I think it helped us in the long run, definitely changed our views on music writing, but for the better!

Was there anything in particular that influenced this album in a lyrical sense?
I don’t really think we had a main source, we were a little bit kind of all over the place.  We generally write about personal experience and things we go through as a band. 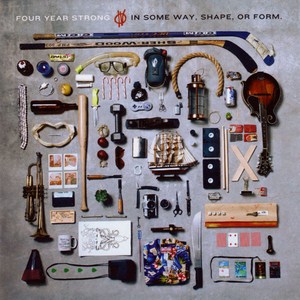 Each of your releases has thrown up some pretty interesting album covers, what do you have to share about the seemingly random objects that adorn this latest cover?
We’ve always done crazy illustrations, weird and crazy stuff.  The difference with this album specifically I think we were taking it a little bit more seriously from the beginning.  So we wanted to take the album art a little more seriously as well, even though we are still lighthearted guys who like to keep our sense of humour in tact!  It was an important record for us and an important time in our career and there are a lot of cool things going on.  So for the album cover we just came up with the idea of having just a bunch of random stuff, which were all personal items of ours that we thought matched our personalities and the bands.

‘Just Drive’ is a song that you have selected to be the single and video, what was it about that song in particular above the rest?
I guess more than anything else, we just thought it was a cool song!

Well I guess you don’t need much more reason than that really do you now….
Exactly!

Next year you are headed back to Australia for Soundwave, you guys are getting to be pretty regular visitors out here now!
We just love it over there!  We did a headline tour for our first time over there, which was a long time ago, and I can’t remember when that was!  Then we did Soundwave two years ago and it’s just an amazing country.  We are always treated so well by the fans and promoters and everyone working with us.  Its always just so much fun!

Do you guys have a real preference to playing smaller club shows versus the larger festival stages?
It’s really hard to say because they are just so different.  I love to play big venues and festivals and the more people you get to play to, the more of a rush it is!  You just get that high from getting up on stage and seeing all the people there singing all the words, it’s just an indescribable feeling really.  But then again there’s the small club shows, which is just crazy where there are people jumping off the stage and just total chaos and that’s awesome too!

As far as your live performance and even extending to your personally as a live performer, has there been any strong influences over the years that you could say have shaped Four Year Strong’s live performance?
I mean all the shows I went to growing up totally shaped who I am as a performer.  We grew up in the hardcore scene in Massachusetts and saw that and that’s kind of where the band started with the energy that came with our live show.  There’s always a lot of yelling and jumping and its definitely where that side of us came from.  The first show I went to was BB King with my Dad and that was pretty cool, but the first show I went up which I chose, I went and saw Saves The Day and that just changed my life forever.  Seeing that hardcore energy we grew up with, and then you’ve got Saves The Day with the melodies and nicer sounding guitars and people not so angry, that was totally what I wanted and what the band wanted.

On the new album there is a track called Fairweather Fan, which you dedicated to your fans.  Generally speaking, as you tour the world, have you got a sense for how diverse your fan base is?
I think the great thing about the band that we’ve been really proud of is how different all the fans are. They range from hardcore kids to pop punk fans through to just regular concert goers and music lovers.  I think the great thing about bringing all those different kinds of people together, is the fact that they are all there for the same reason, everyone has a similar attitude towards what kind of show it’s gong up be and what kind of fan they are of our band. Everyone’s kind of got the same mindset, even if they come from totally different backgrounds!

You recently celebrated the 10th anniversary of your first show, obviously a lot has happened to the band in that time, but what I want to ask, is what has stayed the same, what’s been the one constant throughout that ten years?
I would say it’s just that mindset of who we want to be as a band.  I don’t mean that in terms of what the songs sound like, but what our intentions are with our career you know.  We’ve always wanted the same thing.  We just want to be a band and play music because it’s fun and that’s what we like to do!