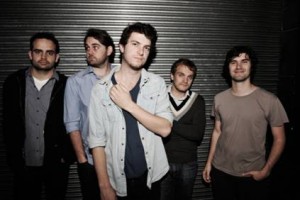 Forget Hercules, the only supermen of mythical proportions you need to worry about this summer is Perth quintet SPLIT SECONDS. The power pop protagonists are suiting up, saying their prayers and getting ready for an almighty battle against…the month of November?

That’s right, Split Seconds have been chosen to support fellow West Australians JEBEDIAH as they lead the charges on their Battle For November Tour. The pair face some trying times ahead, with wild crowds and ungodly flight schedules awaiting them in battlefields across Fremantle, Melbourne, Adelaide, Sydney and Brisbane. Thankfully they will have the supreme sidekick sisters STONEFIELD riding shotgun on this treacherous voyage.

The road ahead is long and arduous, and it doesn’t get any smoother once they come off tour with Jebediah. Summer festivals, including Homebake, Pyramid Rock and Southbound, New Year’s Eve parties and recording sessions for their debut album all loom large for Split Seconds, but our brave heroes are sure to take it all in their stride.

The road to 2012 is getting shorter and shorter. For Split Seconds, it’s been one that’s presented many challenges, but ultimately one that’s reaped its share of rewards – like triumphant national tours with THE PANICS and OWL EYES, and high rotation of their single ‘All You Gotta Do’. What lies beyond the end of this year is anyone’s guess, but one thing is certain: the run home is gonna be a whole lotta fun!