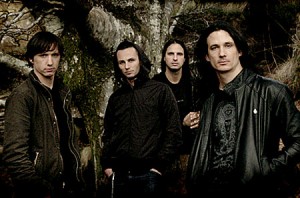 Roadrunner Records announced today the addition of French metal behemoths Gojira to the label. The band is universally recognized as one of the most talented and extreme art-metal acts on the scene today. Gojira are one of those rare bands that come along every couple of years and take everything you know about metal, twist it, reimagine it and come up with something wholly unique. It’s doubtful you’ve heard anything like Gojira before. The band makes that much of an impact with its music and approach.

Gojira are comprised of vocalist/guitarist Joe Duplantier, who has a previous relationship with Roadrunner, having played bass on Cavalera Conspiracy’s debut ‘Inflikted,’ along with guitarist Christian Andreu, bassist Jean-Michel Labadie and drummer Mario Duplantier, who is also Joe’s brother!

“We are so stoked to walk with the legendary Roadrunner,” Joe said about the new partnership. “We discovered Sepultura, Machine Head, Death, Fear Factory and so many other great bands thanks to these guys. Roadrunner has been a great source of inspiration for us as metal fans. It’s an honor to be part of this family today as a band. We feel we’ll get the right support at the right moment in our career.  We cannot wait to release our new record and get back on the road.”

The band’s Roadrunner debut will be its fifth album overall. It was 2005’s From Mars to Sirius and 2008’s The Way of the Flesh which established Gojira as a metal force of nature and a key player in the scene. The band will record in New York City, also the label’s headquarters, in November 2011, with a Autumn 2012 release date being eyed.  Joe Duplantier will serve in a co-producer capacity along Josh Wilbur (Lamb of God).

“I’ve been a huge Gojira fan ever since their monumental “From Mars To Sirius” album and have been actively pursuing them ever since,” Roadrunner Senior VP of A&R Monte Conner said in a statement. “I am thrilled to finally be welcoming them to the Roadrunner family. Gojira are one of the best bands in metal today, with a sound and style all their own.  Their live shows are unreal, from the level of playing, to the intensity, to the Godzilla like stomp that hits you in the chest.”

The band has kept busy in between albums. They recently recorded the four-song Sea Shepherd EP, with all proceeds from the EP benefiting the Sea Shepherd charity. Sea Shepherd is a Washington-state based non-profit marine conservation organization which employs direct action tactics to protect sea life. One of the songs, “Blood And Salt,” recently surfaced on a Metal Hammer UK sampler CD. Release details on that EP, which is loaded with A-list metal guests like, Lamb Of God’s Randy Blythe, Mastodon’s Brent Hinds, Soulfly’s Max Cavalera and Strapping Young Lad’s Devin Townsend to name a few, are yet to be determined.

In other Gojira news, the band will perform as part of Australia’s Soundwave Festival, which is slated for February 2012.