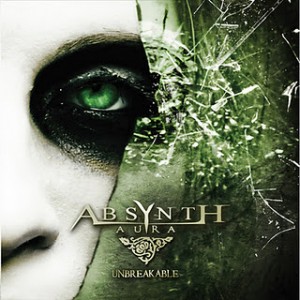 Hailing from Italy, Absynth Aura first came into existence in 2007 and in 2011 have now released their debut album Unbreakable, after the formative years spent establishing the band in Italy and Europe.  Fronted by female vocalist Claudia “Klod” Saponi, Absynth Aura deliver a style of rock that whilst could be compared to the likes of fellow Italian’s Lacuna Coil, Nightwish, Evanescence and All Ends.  However, the thing that gives Absynth Aura it’s own personality, aside from the name, is the fact the songs throughout Unbreakable feature some pretty damn impressive instrumentation and the band draw on their influences of soul, funk, pop, progressive, metal and rock.

The band are at their heaviest on opening tracks Believe Me and the first single from the album Desertflower.  That’s Why You Die sees the band’s varied musical personality come through, a song that is both lyrically and most musically powerful and shows a great range of the vocal capabilities from “Klod”.  Smile is just a great pop song, with an almost Roxette styled chorus.  Understand My Fight is all about an aggressive delivery and features some bass playing courtesy of Giorgio “JT” Terenziani that even Billy Sheehan should be proud of.  The vocals of “Klod” get a chance to shine again with the soul tinged piano ballad Looking For The One, a track that if released by someone like Pink, would probably be a hit worldwide.  The epic Unbreakable clocking in at just under 7 minutes is a musical tour de force of musical styles, tempo changes and guitar solos.  Closing the album is an interesting cover of Zombie from The Cranberries, yes we all should know that song.  Rather than simply doing a version faithful to the original, about the only thing recognisable is a similar vocal delivery, with this version dominated by some intricate guitar work, rather than the driving power chords of the original.

Having no background to Absynth Aura prior to being sent this album for review, I certainly enjoyed this far more than I anticipated I probably would and can recommend it to anyone that is into female fronted rock and metal, in all it’s forms.

Check it out if you like: Lacuna Coil, Nightwish, All Ends, Evanescence