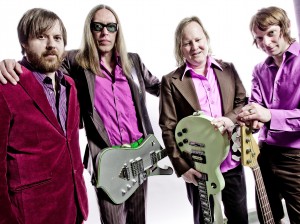 They have no right to be this good, really they don’t. Fifteen years since their last release Chicago-born hep-cats Urge Overkill return with a brand new album Rock & Roll Submarine – and no better way to celebrate than a welcome return visit to Australia this coming March.

“From Mason Dixon’s struttin’ Southern boogie and the title track’s exhilarating echo of the Stones’ Soul Survivor, through to the adorably vulnerable Quiet Person–what a hoot”  – Mojo May 16th 2011

In the live setting, the band have effortlessly picked up from where they last left off. Stopping by for a brief visit to Australia in 2006 after initially reforming, the shows, including a performance at Canberra’s Stonefest reminded everybody of just what great presence Urge Overkill possess.

“Urge Overkill took the stage and launched into an incredibly loud and powerful set, blowing away any pre-conceptions of “Will they be any good, have they still got it?” They were quite simply, fucking amazing” –  Fasterlouder.com.au

And now here they are back in all their crushed velvet glory, fully armed with a back-catalogue of solid gold nuggets to launch at us – Sister Havana, Positive Bleeding, Bottle of Fur, The Break, Somebody Else’s Body, Girl, You’ll Be A Woman Soon as well as firing off some new tunes from Rock & Roll Submarine all guaranteed to have you stompin’ for more.

Appearing at the invitation of the Golden Plains Festival and for a series of east coast headline shows, Urge Overkill are men on mission!