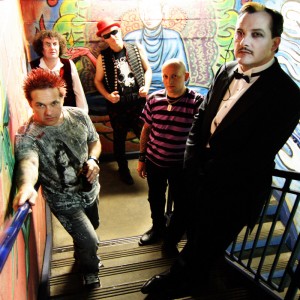 Though the Sex Pistols became the most publicised of all the original London punk groups, it was the Damned who scored some of the most notable ‘firsts’ of the movement, particularly the first U.K. punk single — “New Rose” — in 1976 and the first album, Damned Damned Damned, the following year. Produced by Nick Lowe (Elvis Costello, Pretenders), both were clipped, direct explosions of sheer energy, sometimes rude but never less than entertaining.

After a temporary break-up and a series of line-up changes in the late 70s, the Damned proceeded to make a run of stone-cold classic albums and singles that marked the band’s most successful all-around period. There’d be plenty of low points amidst the highs, to be sure, but it’s hard to argue with the results. Vanian’s smart crooning and spooky theatricality ended up more or less founding goth rock inadvertently (with nearly all his clones forgetting what he always kept around — an open sense of humor) while Sensible turned out to be a master of tight riffs and instantly memorable melodies.

The one-two punch of Machine Gun Etiquette, the 1979 reunion record, and the following year’s The Black Album demonstrated the band’s staying power well, packed with such legendary singles as the intentionally ridiculous “Love Song”, the anthemic “Smash It Up”, and “Wait for the Blackout” and the catchy Satanism (if you will) of “I Just Can’t Be Happy Today”.

On the live front, the Damned were unstoppable, riding out punk’s supposed death with a series of fiery performances laden with both great playing and notable antics, from Sensible’s penchant for clothes-shedding to Vanian’s eye for horror style and performance.

Over the past 10 years, the band has undertaken a touring schedule that younger bands would probably wet their designer jeans at. Taking in virtually every territory in the world, the Damned embarked on a seemingly never ending mission to affirm to old fans and their offspring that this band was growing old disgracefully. This included a legendary performance in 2003, headlining the Avalon stage at Glastonbury, where the Damned caused a near riot with the amount of people sloping away from main stage headliners R.E.M to catch what many quoted as the best performance of the festival – hands down.

35 years on, it’s safe to say that the rush of witnessing a Damned live show is still comparable to that first buzz of energy released at some long forgotten sweat box of youth. Combining full-on rock energy, a stylish sense of performance, and humorous deadpan cool, this is the real Damned deal.

The Damned are dead. Long live The Damned.

Tickets On Sale Friday October 21.  From – http://www.selecttouring.com.au and the Venues.