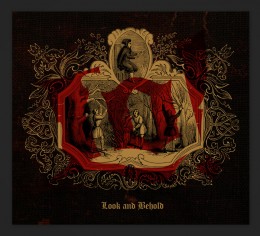 In 25 words or less: I couldn’t help but be mentally transported into some form of violent assault, where every guitar riff is just another slow and powerful bash to the head with a baseball bat.

Lo! (yes there is a ! after the name, it’s not a typing error) originate from Sydney, Australia.  Just as does their music, Lo! have made a pretty big impact on the scene of heavy music both here in Australia and worldwide since their emergence in 2010.  With many shows under their belt around Australia, the band also attracted the attention of Pelagic Records out of Germany, who consequently signed the band for the release of their debut album Look and Behold which dropped on October 14th.

With one bludgeoning riff after riff, guttrall growls and screams and an overall mood of sludge and doom, Look and Behold is definitely an album that will appeal to those of our readers that love the heavy end of the musical spectrum.  The distorted 1minute feedback of Hath opens up the album, before the first song Deluge with a somewhat subdued rock guitar riff, but don’t worry, the sledgehammer soon comes out and it’s game on.  The atmospheric instrumental track Seraphim gives a brief respite after the assault of Bastion and merely prepares for the brutality of the 8minute epic, Hued Tarantula.  Listening to this track, particularly the middle part where the tempo really drops, I couldn’t help but be mentally transported into some form of violent assault, where every guitar riff is just another slow and powerful bash to the head with a baseball bat.  Not exactly the mental imagery that I usually seek from my music, but as I stated before…this is not music made for the meek and mild!

The musical influences within Lo! are diverse and that certainly shines throughout this CD.  There’s plenty of tempo changes, some atmospheric instrumental tracks such as Doth that offer some aural respite for those in need, guitar riffs that cover everything from sludge, rock, metal, doom and even jazz and then you have a track such as Moira Kindle which at times is almost part Foo Fighters alternative rock.

If you love heavy, heavy music, then definitely take the time to check out Lo! who seem destined to become one of the heavy hitters here in Australia and worldwide when it comes to delivering it brutal.

Check it out if you like: Brutal, sludge and doom