Beggars & Thieves announce new album “We Are The Brokenhearted” 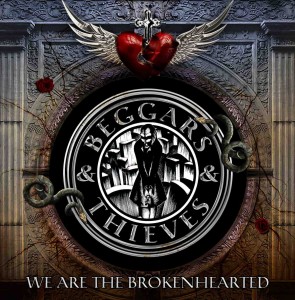 Frontiers Records is excited to announce the release of the anticipated new BEGGARS & THIEVES album entitled We Are the Brokenhearted on November 29th in North America and December 2nd in Europe.

Beggars & Thieves debuted on Atlantic Records in 1990 with their self-titled album, a record that was critically acclaimed with the first single appearing in the top 40 Billboard Magazine Album Rock Charts and being added to rotation on over 100 Parallel One AOR radio stations. The change of musical climate, and the advent of grunge, halted the band’s rise to the stardom when their new label Epic Records decided not to release Beggars & Thieves second studio album “Look What You Create”, written and produced in collaboration with Jim Vallance (Aerosmith, Bryan Adams, The Scorpions, Heart, etc.).

In the late 90’s Beggars & Thieves finally independently released “Look What You Create” followed by “The Grey Album” in 1999, before going into hibernation until 2004 when the founding members – singer Louie Merlino and guitarist Ronnie Mancuso – started to play again in the Sin City All-Star’s with guitarist, Brent Muscat (Faster Pussycat) and drummer, Lez Warner (The Cult), opening shows for Tesla, Vince Neil, Ratt, Slaughter, and Skid Row. “That and the amazing internet support from the European Melodic Rock community pretty much set the stage for reforming Beggars” recalls Ronnie.

Indeed one of the highlights during the last five years was Beggars & Thieves participation at Firefest 2010 in Nottingham, UK. “I don’t think we realized that our music meant so much to so many people. The first time we played Firefest and everybody was singing the lyrics, it just blew Louie and me away” continues Mancuso. “Right from the start we had offers to do another album, but it wasn’t until I partnered up with producer/engineer Kevin Churko while he was producing Ozzy, that I knew by combining our studios and his engineering and mixing skills, we could make an album that competed on the level of anything being released at the time”.

The resulting new album We Are The Brokenhearted promises to firmly position the band on the map for all Hard Rock fans worldwide. In Merlino’s words: « We wanted to make a Pink Floyd “Dark Side of the Moon” or a U2 “Joshua Tree” and that is a huge commitment. I’m not saying we achieved it. But that was the level of passion and effort that was put into making “We Are The Brokenhearted”. I think the new songs show our potential to be a truly classic band and we both feel strongly that this is the best work we have ever done. We just hope people get the chance and take the time to really listen and absorb this as an album: This is an album designed to be listened to as a whole entity, not in shuffle mode on an iPod ». We Are The Brokenhearted proves that great music is timeless. It’s as fresh as it is familiar. Merlino continues: “This isn’t just some guys trying to have a little fun reliving the past. We got a good ten years left, we aren’t messing around, we are deadly serious. We want to compete with the big boys” and with the quality of this album they just might get their chance!

« We Are the Brokenhearted » includes the following tracks: We Come Undone; Oil & Water; Innocence; Never Gonna See You Again; Beautiful Losers; Seven Seconds; Stranded; Wash Away; Midnight Blue; We Are The Brokenhearted.

The first single “We Come Undone” can be exclusively listened in full streaming on theFrontiers Records web radio. Tune in at www.frontiers.it/webradio