Xorigin – State Of The Art 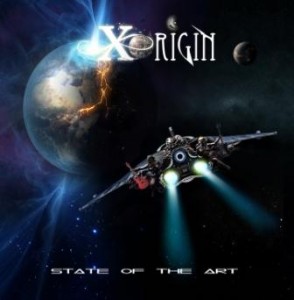 In 25 words or less: All the songs are a winner and anyone with a love for AOR would be hard pressed to not enjoy this release from start to finish.

In listening to this CD, whilst I didn’t have any prior connection with Xorigin, I immediately felt an overwhelming sense of sympathy for the band.  Why, you ask?  Well in music there are always releases that are a victim of circumstances and maybe this will be one of them.  With State Of The Art being released on the 26th August, it was released on the same day when Work of Art and Toby Hitchcock both unleashed albums that are likely to top many album of the year lists.  But, for anyone with an interest in AOR, then State Of The Art is definitely an album that you need to also pay some attention to.

Musically, the band draw influence from the likes of Giant, Toto, Yes and Foreigner and to be honest, that is a rather apt reference point for the style delivered throughout the album.  Just as the likes of Houston, Work of Art and White Widdow deliver an unashamedly 80’s influenced brand of AOR, so do Xorigin…not that you will be seeing me complain about that!

First track Can’t Keep Running sees the band really rock out, but where they excel is on mid tempo tracks such as Crying For You, The One For Me and Too Late which feature some blissful vocal harmonies.  In A Blink Of An Eye is a ballad that comes right out of the Chicago/Peter Cetera songbook, a truly magnificent song!  In fact all the songs are a winner and anyone with a love for AOR would be hard pressed to not enjoy this release from start to finish.

Xorigin are yet another band who originate from Scandanavia, this time both Sweden and Norway.  After more than a decade in the making, the duo of Johannes Stole (vocals) and Daniel Palmqvist (guitar), along with producer/drummer Daniel Flores have released an album that is equally worthy of your attention in a year when we have been blessed with some truly memorable albums.

For fans of: AOR

Track listing:
Can´t Keep Running
Crying For You
In The Blink Of An Eye
Too Late
Gina
This Is It
The One For Me
Said And Done
Matters Of The Heart
What Love Is All About
Mend My Heart