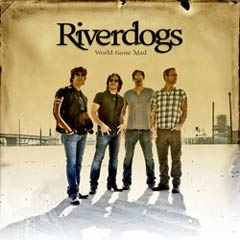 In 25 words or less: “The soulful vocals of Lamothe as always are a real highlight and still really define that Riverdogs sound, as does the storytelling nature of the lyrics…”

For those of you not yet acquainted with the Riverdogs, then first lets have a brief history lesson.  Going way back to 1990, current Def Leppard guitarist Vivian Campbell (previously with Dio, Whitesnake) agreed to produce a demo for the Riverdogs, but more than that, he actually ended up joining the band.  Releasing their self titled debut album in 1990, but with very little label support and going independent, Campbell departed not long after and ultimately joined Def Leppard.  Riverdogs however went on to release two more albums before disbanding.  Vocalist/guitarist Rob Lamothe established himself as a solo artist, bass player Nick Brophy turned to producing and drummer Marc Danzeisen a session player.  Fast forward to 2003 and the classic lineup reunited to record some demos that were never finished and perform a few reunion shows.  Enter Andrew McNiece of MelodicRock Records into the fold in 2010 and here we are in 2011 now hearing those 2003 demos in their completed form after the band finally got together to finish what they started.

Title track World Gone Mad opens up the album in a rocking and rhyming fashion, a song as the title would suggest, about the state of the world we now live.  Bonus points for fitting MacGyver into the lyrics!  The soulful vocals of Lamothe as always are a real highlight and still really define that Riverdogs sound, as does the storytelling nature of the lyrics, such as on tracks such as Big Steel Town.  The guitar playing of Campbell is relatively restrained throughout, but he does open things up a bit on For You with a scorching solo.  But with the Riverdogs, the sound has never been one necessarily dominated by blistering guitars, it’s all about the songs.  From the moody Best Day Of My Life, the acoustic driven Just A Little Higher or the bluesy rock of Glitter Town, the songs really have a live feel.  Speaking of live, the cover of Badfinger’s No Matter What is a faithful rendition of this classic.

With 7 studio tracks and 1 live track, World Gone Mad is really an unexpected addition to the legacy of the Riverdogs and should be viewed as that.  Listening to the album and the quality of the songs, it will no doubt certainly leave Riverdogs fans wanting more and one can only hope that the experience of recording and releasing this album has reignited some fires within the band to think about another release.

Check it out if you like: Riverdogs, classy melodic rock, Vivian Campbell, Rob Lamothe, Def Leppard.