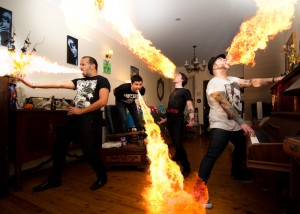 “A sludgy and abrasive (though delicious) stew, seasoned with all kinds of exotic time signatures and a hint of Mastodon” – Blunt Magazine

Akin to the way a volcano can lie dormant for years before unexpectedly unleashing it’s mighty wrath on everything within reach, Sydney band Lo! kept a pretty low profile, until their thunderous debut in 2010.

Conceived in 2006 by guitarist Carl Whitbread after the disbanding of his previous band Omerata, Lo! is made up of four “old hands” of the Sydney music scene. Adrian Shapiro on bass, Adrian Griffin on drums and Jamie-Leigh Smith is the man delivering the militant vocal assault that has heads talking.

Lo! have made their presence felt by supporting local heavyweights like The Nation Blue and recently snatching sought-after supports with bands like Doomriders and post-metal giants Russian Circles.

Word travels fast, and the band’s cleverly crafted, sludge-inspired metal found it’s way to Germany and into the ears of Pelagic Records owner Robin Staps, who was quick to offer the band a deal. Early reviews coming out of Europe suggest that although Lo! follow bands like Old Man Gloom on their path down the dirt-trail of sludgy, noisy hardcore, the band has their own distinct, and fresh direction.

Whitbread explains; “Having quite a diverse range in musical tastes (everything from death metal, to electro, to classical), I wanted to find a way to bring my favourite elements from different genres into the music, without it sounding like a blatant mish-mash of styles. The main album that really inspired me to start Lo! was Breach’s ‘Kollapse’- that album was a perfect example of a heavy band who had managed to take a wide range of ideas and influence and craft it into an audible journey”.

From the first feedback of opener Hath, to the last waning cymbal of Fire at the Child Actor’s Guild, Look and Behold is an intoxicating showcase of the many talents of one of Australia’s most exciting and subversive ensembles.

Call it sludge, call it hardcore, metal, rock, noise or doom. Call it whatever you want. The critics are calling it “an exceptional debut” and it hits shelves in Australia on Oct 14.

To celebrate the release of Look And Behold, Lo! Are hitting the road for a string of shows throughout October. Do NOT miss out.