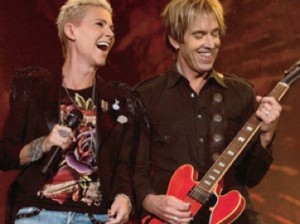 OFFICIAL PRESS RELEASE
Monday August 22, 2011 — Live Nation is thrilled to announce that Roxette fans all over Australia can now join the joyride! Due to surging demand from fans across the nation, legendary pop duo Roxette will now extend their Australian visit and play shows across Australia plus a second show in Sydney next February with tickets going on sale on Monday August 29 at 9am sharp. Super-fast ticket sales in Sydney saw the show sell out on its first official day of sale with fans begging for an additional Sydney show, which is now confirmed for Thursday 16th February 2012.

Roxette are one of the most successful bands to come out of Sweden, have had more number ones and top 10 hits in America than ABBA and have even featured on their very own Swedish postage stamp!

Marie Fredriksson and Per Gessle who make up Roxette, came out of Sweden in the late ’80s. Their game was pop and their mission was to conquer the world. With 33 chart-busting singles and total record sales of 75 million, it seems safe to say, “mission accomplished”. Except for one thing – it ain’t over yet! Biding their time during Marie Fredriksson’s recovery from her brain tumour in 2002, the band has gradually staged a comeback that has climaxed with the release of their new album Charm School and their current world tour. After an extremely successful start in Russia, Roxette went on to sell out concerts throughout Europe, South America and South Africa over the last year with more than one million tickets sold at 70 concerts. After such an overwhelming response in the rest of the world, Roxette have decided to extend the tour to include some very special shows in Australia and New Zealand.

“The concerts have been amazing so far,” says Per Gessle. “Marie and the band are in top shape and the response has been incredible. And the way the new album has been received is great. We feel very fortunate and look forward to a very exciting year!”

Roxette’s brand new album Charm School was released by EMI earlier this year and will support the tour with the release of a tailored Australian greatest hits package, released earlier this month. Charm School went straight to number one on the German, Czech and Swiss album charts the week of its release and is heading for platinum status in Sweden.

With a catalogue of mega hits including It Must Have Been Love, Joyride, Listen To Your Heart, How Do You Do, Sleeping In My Car, Dressed For Success and The Look, this tour is set to be one of THE live events of the 2012 calendar.

Roxette last toured Australia in 1995 on their Crash! Boom! Bang! world tour. A year when we still didn’t quite know what a “Spice Girl” was or what the World Wide Web was all about. And Facebook!? What was that? Mark Zuckerberg was just an 11-year-old kid possibly playing games on his Atari computer. (Thanks to Facebook there is now a “Bring Roxette to Australia” page!) Maybe you were too busy in 1995 watching Beverly Hills 90210, Friends, Seinfeld or The Nanny to see Roxette? Or maybe mum and dad just didn’t let you go? So it’s time now to grab all your friends, listen to your heart and get yourself dressed for success and get ready to join the joyride with Roxette in 2012!

Joining Roxette for these special Australian shows are 1927. Their 1989 album …Ish is one of the highest selling debut albums by an Australian band. 1927’s hit singles If I Could, That’s When I Think of You, You’ll Never Know and Compulsory Hero still remain radio favourites more than 20 years after their release.

Tickets go on sale from 9am on Monday August 29.