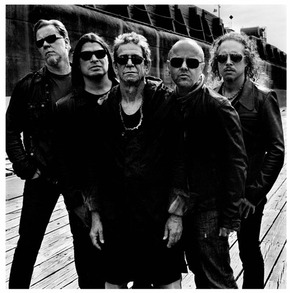 In what is sure to be one of the most talked-about alliances of the year, New York king of avant-rock Lou Reed has teamed up with best-selling hard rock band Metallica to record a brand-new album, entitled Lulu, which will be released by Vertigo Records on October 31st 2011. The album was co-produced by Reed, Metallica, Hal Willner (who has produced albums for Reed, Marianne Faithfull, and Laurie Anderson, amongst others) and Greg Fidelman.  Fidelman also mixed the record.

The idea for these two giants of modern music to work together was born after the 25th anniversary Rock And Roll Hall Of Fame concerts in New York City in October 2009. Metallica –singer/guitarist James Hetfield, drummer Lars Ulrich, guitarist Kirk Hammett and bassist Rob Trujillo — played with Reed on Velvet Underground classics “Sweet Jane” and “White Light/White Heat.” “We knew from then that we were made for each other,” Reed says.

After that triumphant performance, Reed suggested they all make a record together. At first they planned to record an album of Reed’s older material, what Ulrich describes as “some of Lou’s lost jewels – songs that he felt he’d like to give a second spin, and we could do whatever it is we do to some of those songs.” That idea “hung in the air for a couple of months.” Then, a week or two before that session was to begin, “Lou called up and said, ‘Listen, I have this other idea.’”

That idea was to record a series of songs Reed had written for American avant-garde theater director Robert Wilson and German theater group the Berliner Ensemble’s production of theLulu Plays, which premiered in April at the Theatre am Schiffbauerdamm in Berlin, founded by Bertolt Brecht. The songs are inspired by German expressionist Frank Wedekind’s early 20thcentury plays Earth Spirit and Pandora’s Box, and were a rewrite of Edgar Allan Poe’s, The Raven, which emerged as a graphic novel on Fantagraphics Press.

“We were very interested in working with Lou,” says Hetfield. “I had these giant question marks: What’s it going to be like? What’s going to happen? So it was great when he sent us the lyrics for the Lulu body of work. It was something we could sink our teeth into. I could take off my singer and lyricist hat and concentrate on the music part. These were very potent lyrics, with a soundscape behind them for atmosphere. Lars and I sat there with an acoustic and let this blank canvas take us where it needed to go.  It was a great gift, to be asked to stamp ‘TALLICA on it. And that’s what we did.”

“We had to bring Lulu to life in a sophisticated way, using rock,” Reed says. “And the hardest power rock you could come up with would have to be Metallica. They live on that planet. We played together, and I knew it: dream come true. This is the best thing I ever did. And I did it with the best group I could possibly find. By definition, everybody involved was honest. This has come into the world pure. We pushed as far as we possibly could within the realms of reality.”

“It’s definitely not a Metallica album, or a Lou Reed album,” adds Hammett. “It’s something else. It’s a new animal, a hybrid.”

About Lou Reed: The king of New York avant-rock, Lou Reed made innovative, iconoclastic music with the profoundly influential The Velvet Underground before “Walk On The Wild Side” gave him 1972’s most unlikely pop hit. He reacted to this development with admirable perversity; releasing a stream of diverse and challenging solo albums, from the macabre, monumental Berlin to the subtle, seductive Coney Island Baby, from the wallpaper-peelingMetal Machine Music (Cash Box review: no stars) to the punk pivot Street Hassle. He was inducted into the Rock and Roll Hall of Fame and Museum in 1996.  Recent years have seen his always-present literary bent come increasingly to the fore on works like New York, Magic And Loss, and The Raven.

About Metallica: Formed in Los Angeles in 1981 by drummer Lars Ulrich and guitarist and vocalist James Hetfield, Metallica have become one of the most influential and commercially successful rock bands in history, having sold 100 million albums worldwide and playing to millions of fans the world over. They have scored several multi-platinum albums, including 1991’s Metallica (commonly referred to as “The Black Album”), which is the best selling album in history of Soundscan scanning almost 15.7 million albums in the United States alone.  Their latest album, Death Magnetic, was certified platinum just six weeks after it debuted atop the Billboard Top 200 Album chart in October 2008. Metallica have also garnered numerous awards and accolades, including nine Grammy Awards, two American Music Awards, and multiple MTV Video Music Awards, and were inducted into the Rock and Roll Hall of Fame and Museum in 2009.