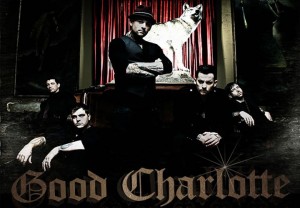 With just over a week to go until the Good Charlotte boys hit Brissie with their own original take on the classic Weezer album Blue, The JD Set are pleased to announce that the party plans have just gone into overdrive with news that joining the line up  alongside the headliners and Amy Meredith are Melbourne rockers Trial Kennedy and Gold Coast rock quintet Nine Sons Of Dan.

Trial Kennedy’s star has been steadily on the rise since their formation in 2002, their debut album New Manic Art and follow up Living Undesigned receiving the sort of critical acclaim every band aspires too and with coveted support slots for the likes of Fall Out Boy and Birds Of Tokyo along with their own headlining tours across the country the band has overcome many trials and tribulations to prove they have the chops to stand out above the pack.

Relative newcomers Nine Sons of Dan have wasted no time in stamping their mark on the live music scene with spots on the 2011 Big Day Out, Open Arms Festival and support slots alongside Aussie favourites Kisschasy and Avalon Drive the band have been hailed as the “next big thing” with FasterLouder proclaiming “these boys have both the onstage personas musical talent to make anyone want to forget all pretence and just dance along”.

With a menu serving up one the world’s most famous band’s supported by three of Australia’s most  promising outfits this special Brisbane edition JD Set is sure to be one tasty affair, that can only get tastier with extra entertainment from DJ’s and  a sumptuous BBQ  we should almost be calling it The JD Festival and with tickets priced at just $40(+BF) you’d be crazy not to get a piece of it.

perform WEEZER ‘The Blue Album’ plus their own greatest hits