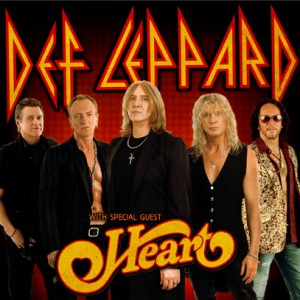 McManus Entertainment is thrilled to announce Def Leppard’s return to Australia in October. They will be joined by American rock band Heart, who will be touring Australia for the very first time.

Over the course of their career, the band has produced a series of classic groundbreaking albums (including Pyromania and Hysteria) that set the bar for generations of music fans and artists alike. The group’s spectacular live shows, filled with powerful rock anthems, continue to sell out venues worldwide. Their epic live show and huge arsenal of hits have become synonymous with their name, leading Def Leppard to be heralded as an institution in both the music and touring industry. The bands live shows clearly demonstrate why Def Leppard remain one of the most highly praised live rock bands of all time!

Def Leppard are one of the few rock bands to join the exclusive “diamond” club, receiving two diamond accreditations (for sales in excess of ten million units) for Pyromania and Hysteria. Pyromania (1983) was recently named by Rolling Stone magazine as one of the “500 Greatest Albums” of all time. The UK’s Kerrang! Magazine chose Def Leppard’s show as one of their “greatest gigs of all time!”

With hits such as Pour Some Sugar On Me, Photograph, Let’s Get Rocked, Animal, Rock of Ages, When Love & Hate Collide and Love Bites, Def Leppard have become a staple on rock radio and music television worldwide.

Heart will be joining Def Leppard on their first ever tour of Australia. Their debut album Dreamboat Annie sailed into the Australian Top 10 in 1976. Heart showed the world that women can rock! Not only did the Wilson sisters (Ann and younger sister Nancy) lead the band, they wrote the songs and played the instruments too, making them the first women in rock to do so. Some of Heart’s biggest hits include Magic Man, All I Wanna Do Is Make Love To You, These Dreams, Barracuda and they have even recorded a cover of John Farnham’s You’re The Voice. Throughout their 35 year career, Heart has sold more than 30 million records, had 22 Top 40 hits, sold out arenas worldwide and had a profound influence on rock music. In 2010 they returned to the Top 10 again with the critically acclaimed album Red Velvet Car.

“We are enormously excited to be bringing our show down under,” says lead singer Ann Wilson. “This is the fulfillment of a long-time dream.”

Joining them will be legendary Australian rock band Choirboys. With a career spanning 30 years, Choirboys will transport the audience back in time with hits including Run To Paradise, Boys Will Be Boys, Struggle Town and Never Gonna Die.

Def Leppard, Heart and Choirboys is a line up not to be missed!