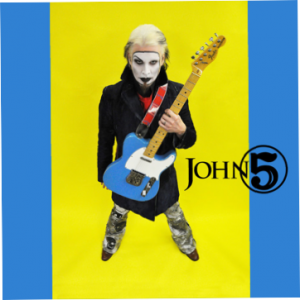 Unless you are a fan or either Marilyn Manson or Rob Zombie, or you are a guitar head, then you could be forgiven for having not heard of John 5 before. But once you read his jaw dropping resume, then you would be scratching your head thinking how could you have not? Either playing with or contributing to or recording with, John 5 has worked with Rob Zombie, Rob Halford, Marilyn Manson, David Lee Roth, Lita Ford, Paul Stanley, Meatloaf, Scorpions, KD Lang, Robin Zander, Lynyrd Skynyrd, Rick Springfield and even Salt N Pepa! Now that’s a diverse line up….

Unsuprisingly, given that resume John 5’s now fifth solo effort “The Art Of Malice” too is a diverse piece of work. Whilst I certainly appreciate instrumental guitar albums and the likes of guitarists Steve Vai, Yngwie Malmsteen, Joe Satriani etc, I certainly don’t proclaim to be a “shredder” and therefore from instrumental guitar albums I seek songs, rather than necessarily song after song of jaw dropping pyrotechnics. Over an enjoyable 45 minutes or so, “The Art Of Malice” balances the two almost perfectly, whilst also stamping a distinct identity/personality…which you don’t have to look much past the album cover for that 🙂

On the eve of heading out on tour in the USA with Rob Zombie and literally in between recording takes for some bonus tracks for a soon to be released version of Zombie’s latest “Hellbilly Deluxe 2”, John 5 gave us the lowdown on his instrumental guitar album “The Art Of Malice”.

Hey John, thanks for chatting with May The Rock Be With You! Now to start with, legend has it that you almost always have a guitar with you….what about right now haha?
Yes that’s correct and actually yes I do! I am in the studio right now, doing the interview with you obviously but there is a guitar right here….can you hear it? (with that, a few strums of a guitar can be heard…)

More so than your previous releases, I think this album is bound to take some people by surprise given it is rather diverse in musical styles and you don’t necessarily need to be a major guitar head to enjoy/appreciate it, do you see your music in a similar way too?
You know I just love the guitar and I love music. It doesn’t even really matter what kind of music, just so long as it’s good. That’s one of the reasons why people might listen to me as a guitar player because I’m not just a clone of Yngwie (Malmsteen) or Paul Gilbert or something like that. I kind of just did my own thing and I think that it’s working. I guess if I just did the same thing as everyone else did then it wouldn’t really be special. So it’s working out really well, I love this CD a lot!!!

Unlike some instrumental guitar songs/albums, which focus purely on unleashing the full arsenal from the artists bag of tricks, with The Art Of Malice” whilst you do accomplish this too, there is still a distinct focus on the songs and on a song such as “Can I Live Again”, a very restrained guitar performance? Did you find it a difficult situation to restrain/balance your playing in order to put the song first?
You know I don’t think so. I have put out a number of records and on this one I wanted to do something different. Speaking about that song ‘Can I Live Again’, I just love David Gilmour and I love melody too. There’s not one person that could say does he play slow, does he play with feeling. Yeah…listen to ‘Can I Live Again’. Does he play acoustic stuff, yeah listen to ‘Last Page Turned’. There’s country stuff, there’s really fast metal stuff…. There’s everything on this CD and that’s because I just love music. It’s really cool, it’s like a guitar players wet dream haha!

When did you start writing for this album? Or is it a collection of songs you have had laying around over the years?
Well I have had song ideas, but primarily I had a complete vision for this record and what I wanted to do. Even ‘Fractured Mirror’ which was the first instrumental song that I really loved which is what really got me into guitar, so I wanted to pay tribute to that. There’s a little bit of my life in every one of these songs. Everything was well planned and thought out, it wasn’t just a bunch of songs thrown together.

Why was the time right now in John 5’s career to be releasing an album such as “The Art Of Malice”?
Well I think it’s more a case of I have never stopped learning and that’s the thing with me…. I think a lot of guitar players get so famous and so big that I think they believe their own hype you know… But I just always want to keep learning and evolving and improving with everything. I am never really satisfied with what I am doing so I think I will always keep growing and growing and growing. 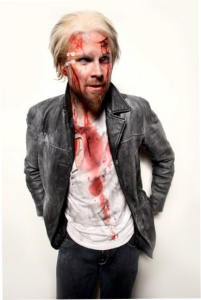 How differen’t is the process for you when writing for an instrumental album versus your contributions to say Rob Zombie etc.
Yes it’s completely different. It’s really tough writing an instrumental song as it’s all on you. There’s no vocals or anything like that, it’s like a little symphony, you have to just keep it all moving and relate to each other. I will usually start with a riff and then do rhythm tracks and then I’ll move to the crazy lead stuff. But I want to keep things fresh and exciting too, and also melodic. So yeah, it’s really tough and a challenge to do. But luckily I love playing guitar so much that it’s a pleasure.

What does being John 5 the songwriter/guitarist offer that John 5 guitarist for Rob Zombie doesn’t and vice versa?
That’s actually a GREAT question, I am glad you asked that! What you said is true, I really do have the best of both worlds. I don’t have to fight to get a little guitar solo on a zombie album, which I guess it doesn’t really call for, but it’s kind of there. So it’s great to have the freedom to then do all the craziest music I want guitar wise. I could do a bluegrass song if I wanted! So yes it really is the best if both worlds and being in Rob Zombie it’s the best band and best situation I have ever been in, in my life.

Now did I hear you say earlier that you are currently writing/recording some new stuff for Rob Zombie?
That’s where I am right now actually. He’s in doing some vocals now in the other part of the house. We are just writing some new songs, we are going to have a special edition of Hellbilly Deluxe 2 out with some bonus tracks. it’s going really well man.

On this album you have some tributes & acknolwedgements to obviously some influences on you in David Lee Roth and Ace Frehley, as well as some songs that are obviously personal to yourself… Is there a song on that album that you feel is a representation of yourself?
I love “The Nightmare Unravels”, I really love that. I also love Steel Guitar Rag’. I really love those two songs, but then again I love the whole album.

You have had a continuing theme of country influenced tracks on your solo album. Where did this country influence come from?
Well the first thing I was exposed to was when I saw a little boy who was about 8 years old playing banjo when I was like about 8 years old and it blew me away. I have always been interested in country music because it is so different to metal and rock. In country you have flat picking and finger picking and double stops and banjo rolls and steel guitar bends, there’s just so many things going on with it. So I have always been interest in country music. Then I joined K.D Lang’s touring group and there was a multi instrumentalist there who was just an incredible musician and from there I said to myself, I am really going to get into country guitar playing. It’s so much fun to play but so challenging but just completely different from rock all together.

The album is called “The Art Of Malice” and you have a very distinctive and in a way contradictory yellow and blue cover. Do you care to share your inspiration behind the meaning of this?
The color scheme is that I always want to keep people on their toes. If any really heavy band or dark image band, you know you are going to get dark colors, black and dark red and an overall eerie vibe. But I wanted to change it up and make it so colorful and crazy to get people shocked at the color. Not only are they shocked at the music and everything else, but then you have that cover too haha! I want to keep people guessing. The cover is very vibrant and certainly leaps out at you in the store! The title, well it’s kind of how I am…”kill them with kindness” because I am so nice haha. But those are the dangerous ones and the ones you have to watch out for!

Ok, here’s some free time for you to give an advertising plug for the latest guitars you are playing/custom models etc with FENDER haha!
Well I am just enjoying playing those guitars and the Squier version of my main model is out and people are just eating that up because I wanted to have a guitar out there that was priced to sell for the kids to buy. People are just going crazy for it!

I know we are out of time now, but just one last question. Do you know if at any stage Australia will be on the Rob Zombie touring horizon?
Touring Australia with Rob in February in 2011, I think the plan might be, but I a not totally sure. Australia is one of my favorite places in the world and I am not just saying that because I am talking to you. I love Melbourne and I even love Perth! So yes, hopefully see you guys in Australia next year!