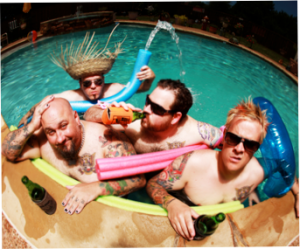 Here at May The Rock Be With You, we love music and we preferably love it happy!  You know, the kind of music that puts a smile on your face no matter what kind of mood you are in, lyrics that make you laugh, hooks that stick in your head like glue and a chorus that will have you singing in the shower for weeks!  For 15 years now there has been one band that has delivered all the above and more.  That band is those multi-million selling, Grammy nominated Texans from Denton County, the fabulous “Bowling For Soup”.

Having spent earlier this year in a recording studio in Austin, Texas with producer Linus Of Hollywood, the band now present to the world their killer new album, “Sorry For Partyin”.   With the “it’s so wrong, it’s freakin awesome” “My Wena” and witty second single “No Hablo Ingles”, it’s clear the band have taken things on this album to a whole new level with supersize servings of everything that is so great about BFS!

Rising to prominence here in Australia a few years ago with the hit singles “1985” and “Girl All The Bad Guy’s Want”, BFS planted the seeds In Australia once again last year playing a bunch of shows as part of a touring package that included Pennywise and Sum 41.

Fellow Australian’s this is your call to arms. A call to arms to claim the title of Australia being the biggest market for BFS outside of the USA.  A title currently held by the UK…yes the UK, now what’s with that?? So join the BFS Army, spread the word to all your friends and let’s all adopt new song “Hooray For Beer” as our summer beer drinking anthem!

But first….check out our interview below with BFS frontman Jaret Reddick on the eve of the album release and the bands UK tour…hear that Aussie’s, UK TOUR!!!

Bowling for Soup have been together now for 15 years as a band, what are some of your best and worst memories with BFS over the last 15 years?
I don’t have a LOT of bad memories…Most of the time, as long as we are all together, we are fine…I mean, being stranded in foreign airports for 15 hours sucks, but you make the best of it when you are with your best friends!

The first few years were a lot of fun, but after we signed with Jive in 1999, we thought everything was set! the next two years were really hard…No money and no support from the label, because frankly, we werent selling any records…Then the UK exploded for us, and it all began to turn around…then the Grammies and so on….

As far as good memories, I wouldn’t even know where to start. They are pretty much all good!

Musically each release just keeps bringing more and more into the BFS bag of tricks. Do you feel that you are only just now hitting your peak?
I do…And I am not even sure I am there yet from a writing perspective.  I think the Niche is there and we are fine tuning it.  But this album is so fucking good, I can’t imagine where we will go next, it will either be even more amazing or totally blow!

Your new album ‘Sorry for Partyin’ is sure to crack a few ribs with the always clever and funny lyrics that BFS deliver, and in hearing the songs you have released thus far such as “No Hablo Ingles” and “My Wena”, whilst being classic BFS lyrically, seem to bring in more of a pure power pop influence than ever before. Is this indicative of the album in general?
As far as feel, the album is concise…I really felt like our last album was all over the place..I wanted to tighten this record up and have it be more of a cohesive record.  It was hard choosing 13 songs out of 25 recorded and 60 written, but I think we chose the correct ones for what we were trying to do.  It just flows!

Further on from that, can you give us an insight into the songwriting process for a Bowling for Soup album. What comes first, lyrics or the music/melody?
It can start from anywhere, really, a riff, a lyric, or a concept.  Sometimes I will sing a nonsensical tune into my phone, and it becomes a song.  Literally each song is completely different in the way it comes about, I don’t know if that means I am still learning, or if it means I can make a fucking song outta anything! haha…

The one thing that BFS are famous for is your music videos.  When writing a song do you already have a concept for a video in mind or is that something that comes later on?  Also, what can we expect video wise coming up?
It comes later.  Mostly video concepts happen over beers….someone shouts out an idea and we start expanding on it.  Sometimes we combine ideas, thus the double story lines at times, those are my favorites!  The video for “No Hablo Ingles” is almost done…I think it’s conceptual, it is our funniest yet, but it will be hard to top “The Bitch Song” and “1985”…we will see!

You, yourself recently had a guest spot on the mighty Danger Danger release “Revolve”, have you brought in any guests for “Sorry for Partyin'”?
For sure! We have Parry Gripp (Nerf Herder) and Scott Reynolds (All), also Tony Scalzo (Fastball) and of course Linus of Hollywood! I love the whole “guest spot” thing…It’s like we are all hip hop and shit!

You are about to head off again on tour to the land of ‘old speckled hen’ and ‘spotted dick’, is it surreal that the UK is turning into a major market for you now?  Maybe one day we’ll see Sir Jaret if it keeps going this way….
Ha…I always worry the sword will take off an ear! We have been to the UK 16 times now, the fans there have been amazing to our little band.  For some reason they get us, I guess… 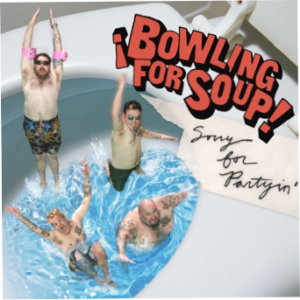 Obvious question, are there any plans on the horizon you can reveal yet about Australian touring plans? I don’t think there is any doubt that us Aussies “GET” BFS, so hopefully it’s just a matter of time before the band takes off here like you now have in the UK?
We are SO ready to come back! The biggest issue is the expense of getting there and moving around once we are there.  But I am making Australia a priority on this album! I really think it could work there.  But we need help! So hopefully your readers will spread the word and possibly joinwww.bfsarmy.com and help us get back there sooner than later!

Your live show is one that really needs to be seen. What can the fans expect set wise on the new tour?  Are you bringing a 7ft Wena on the road?
We are trying a lot of new visual stuff.  The Wena will indeed be making some appearances here and there…you never know!  We have added video to our UK tour, so if that goes well, we will likely expand on it.  Plus, we are REALLY good at playing our songs, as well as other peoples…Ha!

Your record label ‘Crappy Records’ is producing some awesome talent and it’s great that BFS are taking some of these artists on tour, are there any bands we need to look out for in the future?
We only have three acts and I believe all of them will be blowing up in the coming years.  MCLars, The Leftovers (Portland Maine) and Skyfox.  I couldn’t be more excited about all of them and what they bring to the table.  They just make GREAT music!

Lastly, here’s to another 15 years with BFS but you now have free reign, any closing comments?
Yes…May the Rock Be With You!!!!!  Ha!

Thanks mate, look forward to reading it and having a beer again with you soon one day!
Thank YOU! and yes….We will have beer soon my friend!