WIN tickets to see and meet (Hed)p.e. and Snot in Sydney (CLOSED) 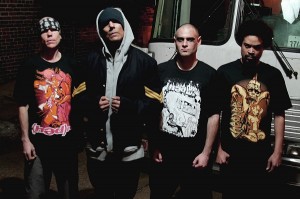 Thanks to our very good friends at Riothouse publicity, we have three double passes to see (Hed)p.e. and Snot in Sydney at the Factory Theatre on October 16, including a meet and greet with both bands to give away to three of our lucky readers.

So if you want win one of the three double passes, simply send us an email to mtrbwy@maytherockbewithyou.com with the subject line of ‘(Hed)p.e. and Snot Giveaway’ and include your name, address, phone number and the answer to this question…

‘What year did Snot release ‘Get Some’?’

Ahead of their October tour playing their classic “Get Some” album in full, reformed Funk Metal legends “Snot” have just announced they will now be joined by Californian rasta-punk legends (Hed)p.e. for their double headline national assault!

With a career spanning more than 20 years and nine albums, U.S. metal/rasta/punk heavyweights (Hed)p.e need no introduction to Australian fans. The band have enjoyed a long-running love affair with the country ignited by (HED)p.e.’s genre defying blend of aggressive sound and enlightened lyrics.  While the band has weathered the stormy waters of the music business for over a decade and enjoyed a slew of successful albums, it’s their quest for answers that has given them purpose.

(Hed)p.e. have their sights firmly set on the New World Order and they are using their brand of hardcore to bring it down. While early (Hed)p.e. albums found them mixed up in the rock n’ roll lifestyle, the group have been reborn to become the voice for a movement that empowers the youth and explores Secret World History, and at the same time promotes unity and political activism. Always pushing the envelope, (Hed)p.e.’s new album EVOLUTION is built on heavy dark riffs and deep, solid grooves.