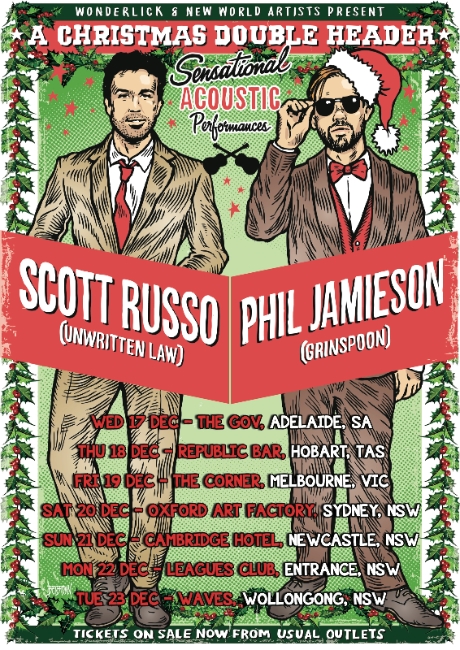 THEY’RE BACK! RUSSO & JAMIESON TEAM UP FOR CHRISTMAS SHOWS

They joined forces earlier this year for two SOLD OUT shows in Sydney and Melbourne, and now the rest of Australia will get the chance to experience Phil Jamieson and Scott Russo’s live show.

The two front men will be giving fans an early Christmas present as they hit the road for their national tour this December, starting in Adelaide and making their way through Tasmania, Victoria and New South Wales.

Grinspoon front man Phil Jamieson has spent much of the past year taking to stages around the country establishing his own successful solo career after the band announced its hiatus last year.

As the lead vocalist of one of the world’s most discernible pop-punk bands, which gained traction in the early 90’s, Unwritten Law’s Scott Russo hit it off with Jamieson during the Vans Warped tour in 1999.

After jamming together in hotel rooms and tour buses over the years, the pair of rock identities developed a sound that has manifested itself into a unique, stripped-back set, which has been screaming for the presence of a live audience.

This is a rare opportunity to catch these rock royals onstage, alone and together, with a live set that is charged with raw chemistry and flowing with quality on-stage banter between songs.

For those Unwritten Law fans in Queensland: never fear! Scott Russo will be playing shows solo in Brisbane and the Sunshine Coast. Check Oztix for more details.

Get in early to grab your tickets!