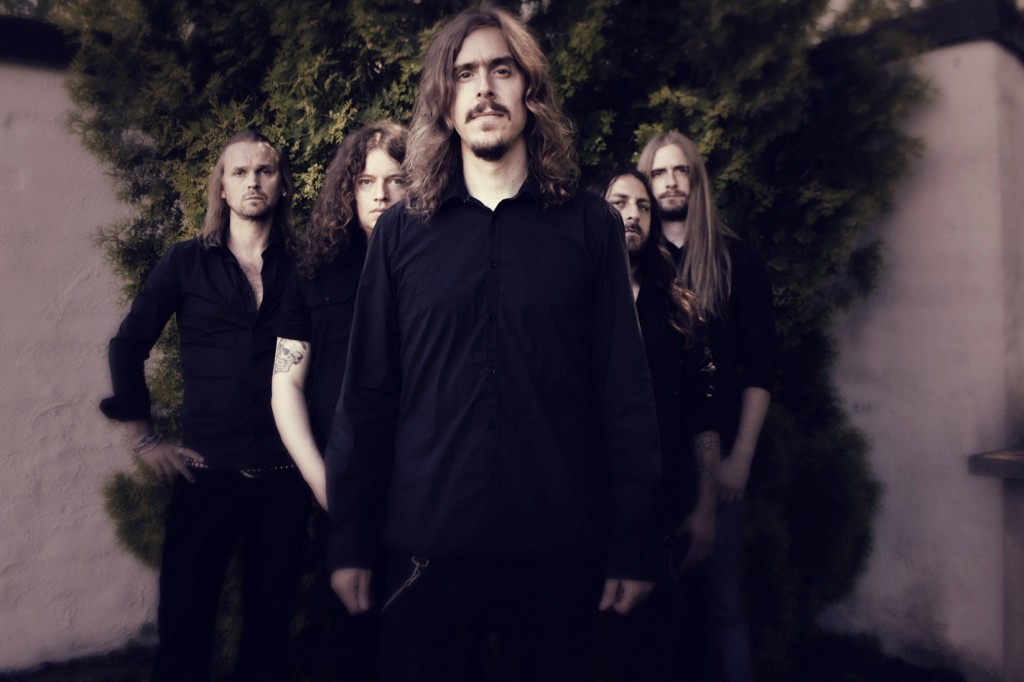 “At the time he said if it wouldn’t have been for ‘Heritage’ maybe the band wouldn’t have existed anymore. So it was in a way it was some kind of, well I wouldn’t say cleansing, but I’m proud of the album, I still like it, I understand people, hardcore metal fans because there was no screaming but in a way it’s quite metal within this album, because it’s kind of bold to do this kind of album.”

From tour press release: Opeth have spent over two decades steadily amassing a body of work that can only be described as epic and iconic; inventing and reinventing the rules as they go along. Opeth’s transcendent live shows have gone down in music folklore. On their upcoming March tour fans can expect a career defining set featuring songs from across their expansive catalogue. Their previous Australian tours have seen the sold out signs hung from venues across the country months in advance and this time will be no exception.

Just back from a studio session with Mikael, we spoke to Fredrik from Opeth about the band’s upcoming Australian tour that kicks off next week. He gave us an insight as to what we may hear and how it will differ from their last tour as well as hinted towards new material and why ‘Heritage’ needed to be made…

You were last here in December 2011, playing to packed out crowds just after the release of ‘Heritage’, you’re now headed back to Australia in March for some shows, what can the Aussie crowds expect this time around?
This time around we’re going to play quite a different set list from last time, last time we played I think about five songs from ‘Heritage’ and this time around we play two songs and we spread it out a bit more. It’s a very different set list, it’s more heavy this time around. We enjoyed playing the last set and I know we were stretching it a bit as we didn’t play any songs with growling vocals but on this round we will, songs like ‘White Cluster’, ‘Blackwater Park’ and stuff like that. So it’s going to be quite a heavy set compared to last time, last time had its heavy moments but in a different way, this time around we do it different from last time and it’s very important for us to do it different show coming on the same album second time to Australia.

In your time with the band, how do you feel that you’ve evolved personally in to the role?
Well it feels very solid now and guitar playing wise it covers a lot of the different areas now and it makes it a lot of fun to play, now in march it’s going to be six years since I joined the band, and today we were doing some new stuff for the next album, demoing and I was really happy, I felt like a fifteen year old heavy metal kid, it was fun. It’s evolving for me a as a player but I also think the band is still evolving, developing and reaching new grounds and I think ‘Heritage’ was different but it was an album that the band needed to do, to do that different kind of stuff instead of repeating ourselves and trying to do a more death metal type of album which Mikael probably would like to do but you never know what the next album is going to be like. To get back to your question, it feels like we’re a solid unit now, it takes you quite a while to get in to the landscape although the sound was different to listening than playing it, but it’s easier for me now than in the beginning, put it that way.

You just mentioned you were demoing some new songs, now you snuck a co-write in on the last album as a bonus track, have you been writing more for the new album or has this been left to Mikael?
I’m always trying and I’m always recording stuff, today I did a solo on one of the songs that Mikael wrote, but I’m working on some ideas and we’ll see what happens on the next album, I’ve been fortunate to have one song on each studio album that I’ve played so far. I co-wrote ‘Porcelain Heart’ with Mikael and also ‘Pyre’ on the bonus track of ‘Heritage’. It’s too early to say but I’m doing my best to put some stuff in there with them and it’s always difficult as well as Mikael has a very strong vision and he always comes up with a lot of good stuff and if there’s anything he’s light on, I will definitely introduce some ideas to him, so we’ll see what happens.

So when do you think we can expect this new album or new material from the band?
Our goal is to try to go into the studio in late September, that is just our goal, it depends how the writing goes, it’s not confirmed, but we still have quite some touring to do, we have Australia, then we have a couple of shows in Japan then we’re home for a few weeks, Mikael’s going to move apartment in those weeks and then we’re going to America, also with Katatonia, also to do our last headline run for ‘Heritage’ and then a few festivals, you never know how many we’ll add on during this summer and that’s it for the ‘Heritage’ tour. It’s a tighter schedule for ‘Heritage’ after the ‘Watershed’ tour was done, because then we had quite some time off but now we’re looking at going in to the studio almost directly.

After some criticism of Heritage and the lack of ‘heavy’ material compared to previous releases, is the heavier sound something that may make a return on the next release or is this direction more of what Opeth is about today?
It’s a bit early to say, but the stuff I heard to today, I don’t know how much I’m allowed to talk about it *laughs*, it’s heavier riffs than on the ‘Heritage’ album, in a way, it’s too early to say I think, but it’s going to be different to ‘Heritage’ I can say that much.

On that, the word rejuvenation was thrown around at time of release, was the album seen as just that, a rejuvenation of the band in a way to remain relevant in this day and age?
Yeah in a way I would say, because Mikael said he really needed to do something different, the band needed to do something different because in a way it’s took the death metal thing and screaming to its peak anyway. At the time he said if it wouldn’t have been for ‘Heritage’ maybe the band wouldn’t have existed anymore. So it was in a way it was some kind of, well I wouldn’t say cleansing, but I’m proud of the album, I still like it, I understand people, hardcore metal fans because there was no screaming but in a way it’s quite metal within this album, because it’s kind of bold to do this kind of album.

To me it reminded me of that very Deep Purple type late 70’s metal and the likes…
Yes, that’s why the title is ‘Heritage’ because it’s connecting with the musical heritage, it starts with Rainbow and the song ‘Heritage’ is a tribute to Ronnie Dio and songs with early Rainbow, Blackmore type riffs and we thought it would be cool to have on the album. It’s very different to a standard Opeth song, but in the sequence of the album it worked out and I guess that’s the type of song that would be on an Opeth album if it was called ‘Heritage’.  It takes some time to digest it of course, but I think the next album is going to be quite different from ‘Heritage’.

Your logo is instantly recognizable, and many fans of yours have taken to get it tattooed on, what do you think it is about your music that encourages people to get this image on them permanently?
*laughs* that’s a tough question. I think it’s the symbol, the O, it’s a cool piece of art, it stands out, I hope it’s because they like the music, maybe the like the fact that music is not stereotyped, it’s free, you never know what’s going to happen.

Catch Opeth with Katatonia in Australia on the following dates: