After having the opportunity to interview Marty Marquis from USA alternative country, classic rockers Blitzen Trapper a few weeks ago, I headed off to this show with some mighty high expectations for one thing and pleasingly, that very high expectation was met.  It was simply that tonight would feature cowbell and lot’s of it, but we’ll talk about that more later on, just had to get that on the table from the outset!

It’s a busy week this week around Australia, with a plethora of artists doing the rounds of Melbourne and Sydney in the lead up to the massively diverse lineup at the Byron Bay Bluesfest which takes place this weekend.  Hailing from Portland, Oregon in the USA, Blitzen Trapper made a much welcomed pit stop in Melbourne for this evening’s show.

Opening up tonight’s proceedings were the lush folk, largely acoustic rock sounds of Melbourne quintet, The Paper Kites.  The real highlight for me of their set was their sweet harmonies, which actually was also the flavour of the whole night, behind the cowbell of course.  Their set really had a bit of everything, banjo, slide guitar, tambourine, whistling, and importantly, a highly appreciative crowd, which by the time their set had finished, had really built into a pretty full room.  A perfect opening act for Blitzen Trapper I thought.

Hitting the stage with a wave of acknowledgement, Blitzen opened up with Might Find It Cheap, the lead track off their latest album, the 2011 release American Goldwing, a song that for my ears, really channels the greatest moments of The Black Crowes.  Almost immediately, there was a warm, friendly, rollicking good time vibe that had engulfed the room, a result of the banter in between songs form the six piece, but above all, you can’t help but be standing their shaking your hips, or tapping your toes to the glorious country rock delivered by Blitzen.

Led by lead singer and guitarist Eric Earley, every song is a lyrical story unto itself, whether they be dedicating a song to St. Kilda such as My Hometown, singing about an American “bogan” called Fletcher, or talking cheap perfume on the Tom Petty’esque Evening Star.  Whilst mostly acoustic driven rock, there were indeed plenty of more raucous guitar moments that really let the twin guitar assault of Earley and Erik Menteer come to the fore, reminiscent of the likes of The Band, The Allman Brothers and Lynyrd Skynyrd, all bands that I dare say have influenced Blitzen Trapper in one way or another. 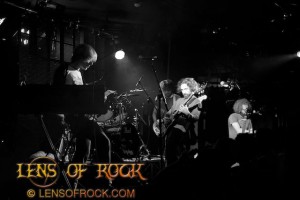 But for me, the gig was all about cowbell and harmonies.  Firstly, the vocal harmonies delivered by the trio of Earley, drummer Brian Adrian Koch and the afro & beard wearing guitarist and cow bell virtuouso Marty Marquis were stunning, in an almost The Eagles like stunning.  And as for the numerous cow bell solos that featured, well it doesn’t get much better than that for me, particularly during one of the nights most rocking songs Street Fighting Sun where we were treated to a cow bell, guitar, tambourine, shaker and maraca extravaganza!  The band could not have played to a more appreciative crowd, a fact that was not lost on the band, who upon returning for the encore, drummer Koch stated something to the effect of “you guys are just so polite over here and really, really appreciate your music, unlike in the USA where everyone just gets wasted and talks a lot”  Biggest crowd reaction during the set proper, would have had to have gone to Furr, but the reaction to the encore of Lady Of The Water and storming cover of Led Zeppelin’s Good Times, Bad Times which closed the night, were not far behind.

All in all, this whole night was about quality, quality songs, musicianship, harmonies, multi-talented musicians and a well and truly varied crowd who appreciated the quality on display.  Those attending Byron Bay Bluesfest this weekend are in for a treat with Blitzen Trapper, so do yourself a favour and make it along to check out their set.

Check out the full live gallery from the show, thanks to our photographer, Lens Of Rock…

Check out our interview with Marty Marquis of Blitzen Trapper…