I Am Giant – The Horrifying Truth – Australian Tour 2012 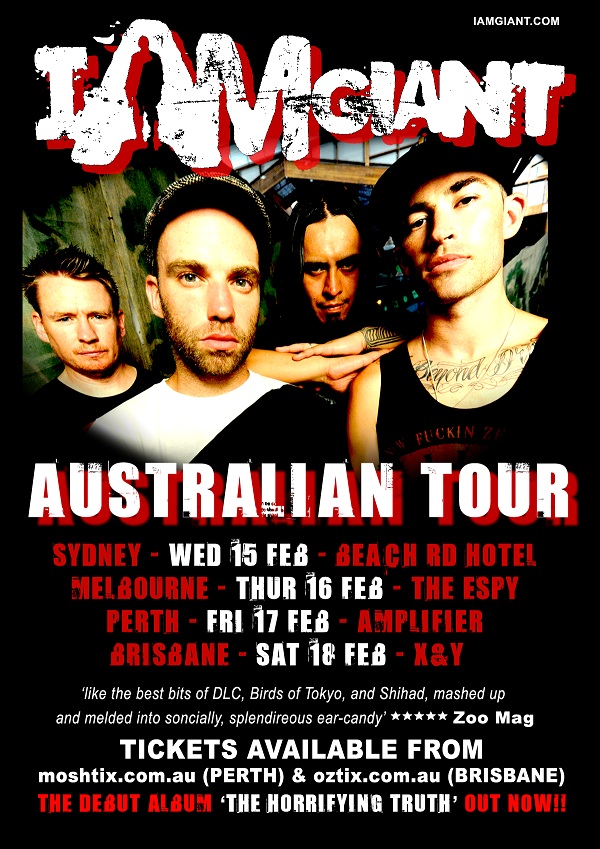 I Am Giant started 2012 with the awesome news that the video for their first single ‘Neon Sunrise’ made it to NUMBER FOUR in the Rage Top 50 videos of 2011!

Then a few days later they found out that their debut album, ‘The Horrifying Truth’ ,was No 5 in the Fist2Face Top 10 Rock albums of 2011.  To top it all off influential US website RCRD LBL also featured the single ‘Neon Sunrise’ (just quietly the video features world champion surfing legend Kelly Slater).

I Am Giant have spent most of 2011 touring through Australia, New Zealand, Asia and the UK supporting the release of their critically acclaimed debut album produced by Forrester Savell and released via Sony Records.

‘like the best bits of DLC, Birds of Tokyo, and Shihad, mashed up and melded intosoncially, splendireous ear-candy’ 5 stars Zoo Mag

After touring through Australia last year with Dead Letter Circus and Trial Kennedy,I Am Giant are returning to Australia to play their own gigs in Sydney, Melbourne,Brisbane and Perth.

I AM GIANT ‘THE HORRIFYING TRUTH’ AUSTRALIAN TOUR

Support bands to be announced.

Both Sydney and Melbourne shows are free entry.

Perth show from moshtix.com.au and Brisbane from oztix.com.au

For more details check out http://www.iamgiant.com

Tags I Am Giant